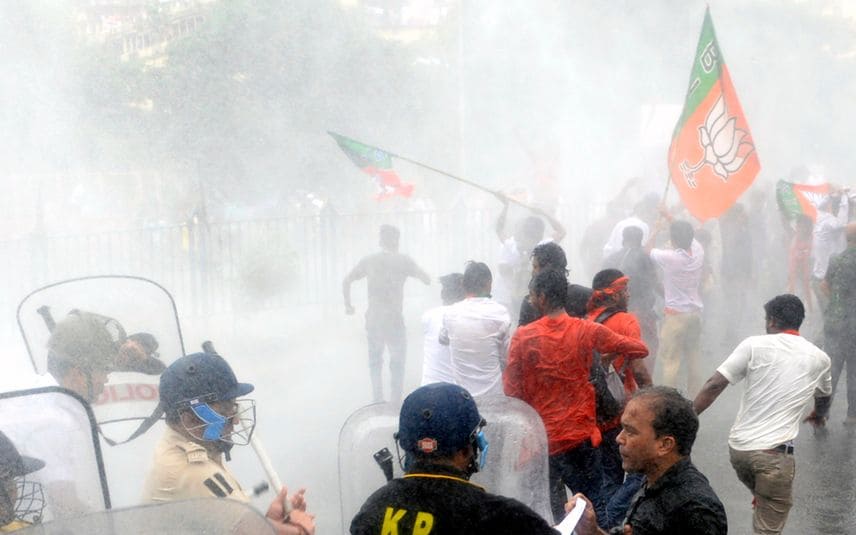 Kolkata: Parts of Bengal turned into a battlefield on Tuesday as BJP activists clashed with the police during a protest march to the state secretariat.

Leader of Opposition in Bengal Assembly Suvendu Adhikari, the party's Hooghly MP Locket Chatterjee and senior leader Rahul Sinha were among those detained during the march, taken out by the saffron party to protest against the TMC regime's alleged corrupt practices.

The police used tear gas and water cannons to disperse the agitators, who tried to go past the barricades that were put in place at several points in the city and its adjoining areas.

"Everyone got to see how the partisan police tried scuttling a leader of opposition's democratic right to protest outside Nabanna. I was manhandled by a woman constable, people saw that too," Adhikari told reporters before being whisked away in a prison van.

In Santragachhi, the police were pelted with stones as they chased away the protesters.

A police kiosk was damaged as the demonstrators were stopped from moving forward.

Similar scenes were witnessed in Howrah, Kolkata's Lalbazar and MG Road areas where violent protesters engaged in a scuffle with the police.

In Lalbazar, a police vehicle was set on fire.

A Kolkata Police officer said "there was no report of any serious injury to any protestors though several police personnel have suffered injuries".

Normal life was disrupted in the city amid the protests, with common people facing huge inconvenience on the thoroughfares, many of which had plunged into chaos.

BJP state president Sukanta Majumdar staged a sit-in in Howrah after being stopped from carrying forward the rally.

"This autocratic Mamata Banerjee government does not believe in giving space to opposition parties," he said.

Majumdar also claimed that it was a shame that the police were acting in a partisan manner, further claiming that "some of them have turned into puppets of ruling TMC".

The BJP state chief and senior leader Agnimitra Paul were later detained from a protest site at Howrah Maidan.

BJP national vice-president Dilip Ghosh, who led the protesters near Howrah bridge, left the site in the midst of a lathicharge on his party's supporters.

"Our fight against this jungle raj will continue," Ghosh said.

BJP state youth wing president Saumitra Khan said "days of the TMC is numbered" and BJP will surely give a reply to all the atrocities committed on party men.

The TMC, in a tweet, said, "BJP4Bengal karyakartas or hooligans?"

"Destroying and damaging government property, attacking police personnel, causing chaos and disrupting peace across the state -- today's activities of BJP that brought shame upon the entire nation. We strongly condemn such outrageous behaviour," the party said in the microblogging site.

TMC spokesperson Kunal Ghosh alleged that the BJP was fomenting trouble under the garb of protest.

"It is part of a bigger game plan to destabilise West Bengal this festive season. This is not democratic movement. This is goondaism," he added.

Seven trains were hired by the BJP to bring its supporters from north and south Bengal on Monday for the protest march to 'Nabanna'.