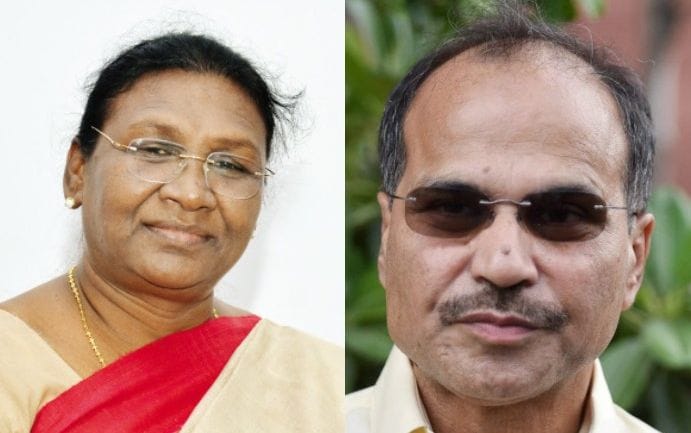 In his defence, Chowdhury, who is the leader of the Congress in Lok Sabha, said he never intended to disrespect the President and his 'rashtrapatni' remark was a "slip of the tongue". He accused the BJP of making a "mountain out of a molehill" over the issue.

"Yesterday, when we were holding a protest at Vijay Chowk, journalists asked where we wanted to go. I said 'rashtrapatni' only once by mistake. I urged the journalists not to show my video where I committed a mistake. The BJP is creating a row over it now," he said.

"What should I do? I said it and realised I uttered the wrong word. I even looked for media persons to whom I had said this to request them to not focus on it. However, I couldn't find them," he added, a day after the remark.

In a video message later, he said India's president, be it Brahmin or tribal, is respected by all.

Leading the offensive both inside and outside Parliament, Union ministers Nirmala Sitharaman and Smriti Irani said Chowdhury used the term knowing well that it demeans Murmu and her office and is against India's values. Both houses witnessed frequent adjournments due to protests by BJP members.

Accusing Chowdhury of hurling a "deliberate sexist insult", Sitharaman demanded an apology from the Congress president, saying Sonia Gandhi appointed Chowdhury as the leader in Lok Sabha to speak and he had insulted the President.

"Chowdhury's comments were not a slip of tongue. It was a deliberate sexist insult against the President," Sitharaman said, making a brief statement in Rajya Sabha.

She said at a time the entire country is rejoicing at the selection of a self-made woman from a tribal background as the President,"for the leader of the opposition in Lok Sabha to call her 'rashtrapatni' in a 'pati-patni' (husband-wife) kind of a level, has insulted the President of India."

"Smt Sonia Gandhi should come before the nation and apologise to the Rashtrapati and also to the entire country for the insult by her own leader in Lok Sabha."

Alleging that the Congress has been targeting Murmu "maliciously" ever since the BJP-led NDA named her its presidential candidate, Irani said she was called a "puppet" and a "symbol of evil" by its leaders.

"A tribal woman from a poor family who created history is being continuously demeaned by the Congress," she told reporters.

The attacks do not seem to stop even after her election to the highest constitutional office of the country, the BJP leader said.

"The Congress leader has disrespected the President. The Congress could not tolerate that Prime Minister Narendra Modi has made a poor tribal woman a Presidential candidate," Irani said in Lok Sabha.

Targeting Gandhi, Irani alleged that she had "sanctioned humiliation" of a poor tribal woman who had occupied the highest constitutional post in the country.

Leader of the House in Rajya Sabha Piyush Goyal accused the Congress of insulting the President of India by using derogatory words and alleged that the opposition party now wants to view the President's office through the prism of caste and religion.

He said the Congress party has not only insulted our President and all women of the country but also tribals as well as the entire upper house.

Goyal said Chowdhury repeated this insult again today by saying that the president can be a Brahmin or Adivasi.

Asked if she would ask Chowdhury to apologise, Congress president Sonia Gandhi told reporters that "he has already apologised".

According to Chowdhury, the BJP does not have anything on the party and is finding "masala" against it.

"The issue is being blown out of proportion... I do not have the remotest intention of humiliating the highest chair of our country," Chowdhury said.

Women BJP MPs, including Union ministers, also held a protest in the Parliament complex against Chowdhury.

Holding placards near gate number one of Parliament House, the MPs, including Sitharaman and Minister of State for Agriculture Shobha Karandlaje, raised slogans seeking an apology from the Leader of the Congress Party in the Lok Sabha.