Hundreds of BJP supporters have assembled at the party headquarters to celebrate. 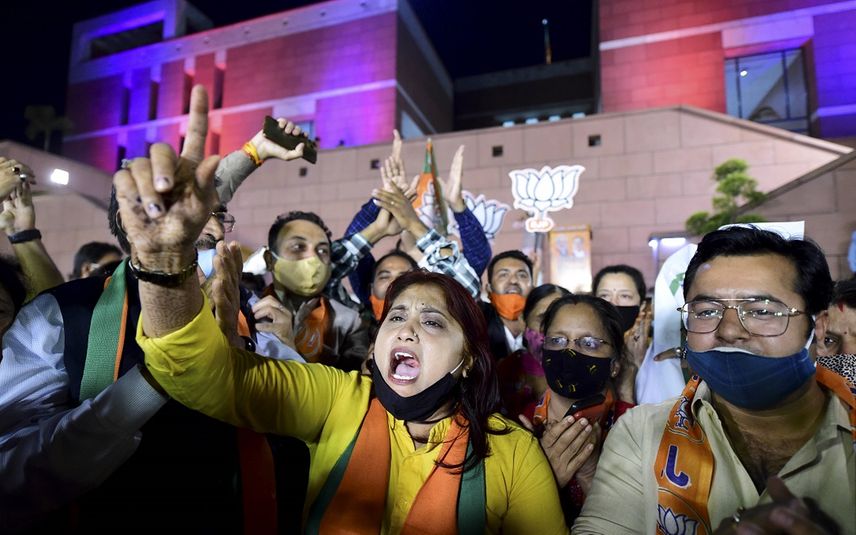 New Delhi: After the numbers in the Bihar Assembly polls appeared to be in the favour of the Bharatiya Janata Party and the National Democratic Alliance (NDA), celebrations began at the BJP headquarters in the national capital.

Soon after the celebrations began with "Modi Hai Toh Mumkin Hai" and "Vande Matram" resonating in the air along with the beat of the dhols, social distancing norms seem to have gone for a toss.

Even as the national capital is witnessing a spike in Covid-19 cases, the absence of much-needed social distancing guidelines seems worrisome.

Hundreds of BJP supporters have assembled at the party headquarters to celebrate.

As the numbers take the BJP closer to victory, 'dholwalas' too have descended upon the BJP headquarters.

The mood at the BJP HQs became happier as the day passed and the numbers seemed to be going in the favour of the "Lotus Party" and the NDA alliance.

BJP National President J.P. Nadda is also expected to reach the headquarters after the numbers are finalised, party sources said.

According to trends, the BJP is leading on 77 seats and the JD(U) on 41 seats.

The fate of the Nitish-led JD(U) government will be decided late on Tuesday night as election results to the 243-member legislative assembly will be declared.

The counting of votes began at 8 am at 55 centres across 38 districts.