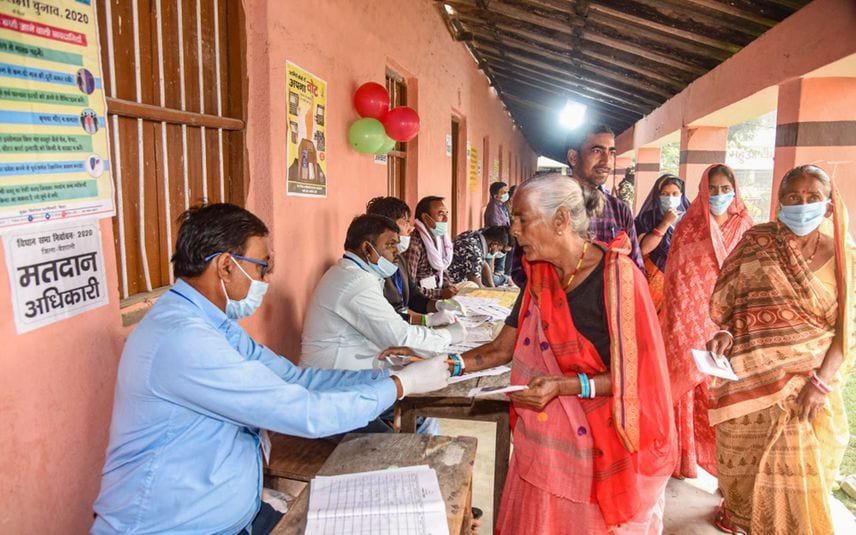 An election officer applies indelible ink on the finger of an elder voter during the third phase of Bihar Assembly Elections, at a polling station in Vaishali, Saturday | PTI

Patna: The third and the final phase of the Bihar Assembly polls got underway on Saturday morning and long queues of men and women covered in shawls and jackets were seen outside polling booths maintaining social distancing. Despite EVM malfunction in several areas over 7 per cent polling was registered in two hours.

In the first two hours since polling began at 7 a.m., around 7.69 voting was recorded, said the state election commission officials, who expected the rush to increase once the day warmed up.

Polling is taking place in 78 Assembly constituencies of 15 districts. There were reports that voting in some booths in Saharsa, Purnea, Kishanganj, Supaul and Darbhanga was affected due to the technical error in the EVMs and the VVPATs.

People appeared enthusiastic, and a significant number of women voters were seen at polling booths.

The highest polling till 9 a.m. was registered in Araria and Vaishali districts with 10.67 and 10.28 per cent respectively. Supaul district recorded 10.11 per cent voting.

Besides, by-election for the Valmikinagar Lok Sabha seat was also underway and the poll panel said 7.73 per cent votes were cast till 9 a.m.

As per the EC, 14 EVMs were being replaced after technical error arose in them. Due to this, voting was delayed by half hour to one and half an hours.

A total of 1,204 candidates are in a fray in this phase. Out of the 78 seats, 63 are general and remaining 15 are reserve category seats.

The third phase of polling will largely decide the fate of the Grand Alliance and the NDA. Hence, both the alliances have put their entire efforts to impress the voters.

In four of the 15 districts -- Kishanganj, Purnea, Araria and Katihar -- the Muslim community is in dominance and holds the key.

As per the Election Commission data, Kishanganj has the maximum 60 per cent Muslim voters, followed by Araria 45, Katihar 40 and Purnea 35 per cent. These four districts have 24 Assembly constituencies. Besides, adjoining Kosi has three prominent districts -- Saharsa, Madhepura and Supaul -- having the Yadav community in majority, and the Muslim community is less then 20 per cent.

The 37 seats of Seemanchal and Kosi where the Muslim-Yadav (MY) equation is strong, analysts says that the Grand Alliance would do better than the NDA.

The LJP factor, however, is challenging both the NDA and the Grand Alliance in the third phase as well.

Apart from Seemanchal and Kosi, polling is happening in Mithilanchal and Tirhut range with districts such as Madhubani, East Champaran, West Champaran, Sitamarhi, Supaul, Darbhanga, Muzaffarpur, Vaishali and Samastipur.

Out of 78 seats, JD-U in 2015 managed to bag 23 seats. Then, it was part of the Grand Alliance and, hence, voters of the Muslim community supported it. The equation has now changed as the JD-U iswith the saffron party. The RJD had won 20 seats and Congress 11 seats. The BJP managed to win 20 seats in 2015.

Besides, the Muslim-Yadav factor, Mithilanchal and Tirhut have a mix bag of upper castes and Dalits having 55 castes and sub castes.

In Seemanchal with 24 seats, the RJD and the Congress parties are contesting on 11 seats each and two seats have been given to the Left parties. On the other hand, the BJP is contesting on 12 seats, the JD-U on 11 and the HAM on one seat under the umbrella of the NDA.

Besides, Asaduddin Owaisi-led AIMIM is also contesting on 14 seats in Seemanchal, including all four seats of Kishanganj. Owaisi's party had won one seat in Kishanganj and maintains a certain popularity.