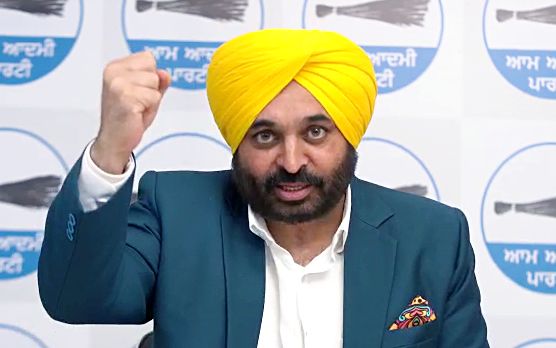 Through a video released on Twitter on Sunday, Mann announced his oath-taking ceremony date and invited the people of Punjab to attend the ceremony at Khatkar Kalan.

"On March 16, in Bhagat Singh's Khatkar Kalan, not just Bhagwant Mann will take the oath and become CM, but along with me all three crore people of Punjab will also become CM. Together we will make Shaheed Bhagat Singh's Rangla Punjab," wrote Mann.

Further addressing the people he said, "This government will be your own government. On March 16, I request all of you to be present at the ceremony at 10 am in Khatkar Kalan to support your brother."

The swearing-in ceremony of Bhagwant Mann will be a low-profile event with the absence of big political leaders.

Mann has invited Delhi Chief Minister and AAP national convenor Arvind Kejriwal to the oath-taking ceremony. According to AAP sources, apart from Kejriwal, no other Chief Minister of any state will be present in the swearing-in of Bhagwant Mann.

Similarly, no Union Minister or any big leader of the national level has been invited for this oath-taking ceremony. Only AAP leaders and local leaders of Punjab will be present at the swearing-in ceremony.

Meanwhile, an area of nearly 100 acres is being used for the ceremony in Khatkar Kalan in Shaheed Bhagat Singh (SBS) Nagar district on March 16. Speaking to ANI, A Venu Prasad, Additional Chief Secretary to Punjab Government, said four-five lakh people are expected to attend the event.

"A seating arrangement for 1 lakh people has been done. More seats are being placed. The venue will be of 100 acres area--50 acres for the main event and 50 acres for parking," he said. He also said that a travel advisory will be issued for the day for the general public in view of the ceremony.

"As per protocol, three stages will be set up. There would be a total of eight parking places - divided into different sectors," he said.

Speaking about his governing skills, Mann earlier said, "We know how to run the administration. I have been a member of this (Lok Sabha) House for seven years. People have re-elected our government in Delhi. We have the experience," said Mann. "Many veteran politicians have lost the elections, and new people have won. I am sure new ideas will come in the state. There will be out of the box thinking in this government," he added.

Mann tendered his resignation from the membership of Lok Sabha to Speaker Om Birla on Monday.

On his last day in the House as an MP, Mann told ANI, "I will miss this House. Punjab has given me a huge responsibility. I promise to the people of Sangrur that a bold voice for them will echo soon in this House."

Mann, who was contesting from Dhuri assembly constituency in Sangrur district, won by a margin of 58,206 votes over Congress' Dalvir Singh Goldy. Earlier, AAP registered a landslide victory in the Punjab polls with 92 seats, pushing most of its rivals to the margins. Congress won 18 seats in the 117-member Assembly.