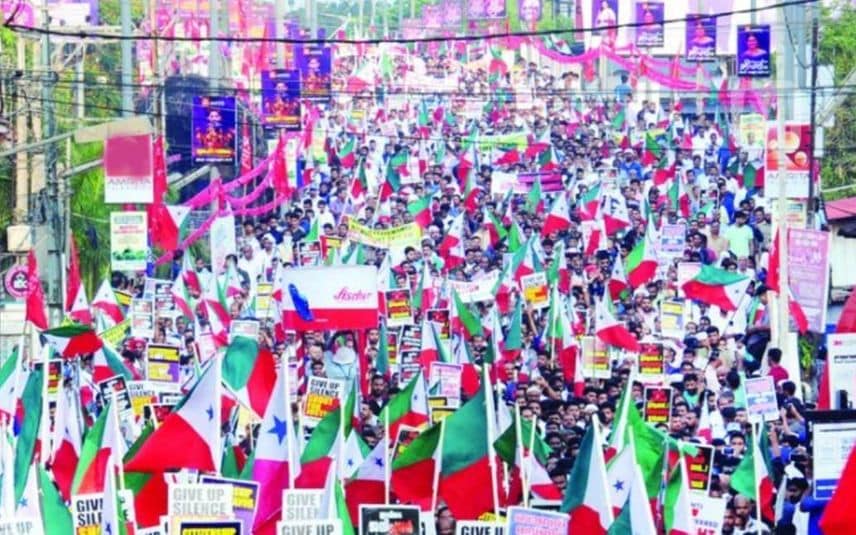 New Delhi: A possible ban stares the Popular Front of India (PFI) in the face for its alleged involvement in terror activities after law-enforcement agencies Thursday conducted searches against it at 93 locations across 15 states in what officials described as the "largest-ever investigation process till date".

The PFI has been under the radar of security agencies for its role in violent protests in different parts of the country against the Citizenship (Amendment) Act, alleged forced conversions, radicalisation of Muslim youths, money laundering and links with banned groups, informed officials said.

The NIA said a large number of criminal cases has been registered in different states over the last few years against the PFI, its leaders and members for their alleged involvement in many violent acts.

The officials said criminal and violent acts allegedly carried out by the PFI over a period of time -- such as the chopping off the hand of a college professor in Kerala, cold-blooded killings of people linked with organisations espousing other faiths, collection of explosives to target prominent people and places, support to Islamic State and destruction of public property -- have had a demonstrative effect of striking terror in the minds of the citizens.

The NIA, according to the officials, has secured 45 convictions as part of the earlier investigations against the PFI and has chargesheeted 355 people in these cases.

Last year, Solicitor General Tushar Mehta had also submitted before the Supreme Court the central government is in the process of banning the PFI, which has already been declared outlaw in several states, including Jharkhand.

Mehta had also said many PFI officer-bearers were found to be associated with the SIMI , which is already a banned organisation.

In January 2018, the then union minister of state for home Kiren Rijiju had said the ministry was considering to ban the PFI under the stringent Unlawful Activities (Prevention) Act.

Following the anti-CAA protests and subsequent violence in December 2019, the Uttar Pradesh government had also recommended the central government declare the PFI a banned organisation for its alleged involvement in violence.

The PFI was also accused of being involved in violence that had erupted during last Ram Navami in Goa, Gujarat, Rajasthan, Madhya Pradesh, Jharkhand and West Bengal.

According to law-enforcement agencies, the PFI has over 50,000 members and a large number of sympathisers in Kerala.

"The PFI cadres are consciously encouraged to intervene and react even in minor cases against members of the Muslim community. The PFI cadres are also encouraged to act as guardian of Islamic values, thus effectively converting them into moral police. The cadres are given training in martial arts and combat using sticks and knives or swords at some locations in their strongholds," says a document prepared by a security agency.

The PFI is allegedly receives funds from its sympathisers, mostly Indians, based in the Gulf countries.

In near simultaneous raids across the length and breadth of the country, a multi-agency operation spearheaded by the National Investigation Agency Thursday led to the arrest of 106 activists of the Popular Front of India for allegedly supporting terror activities in the country, officials said.

According to the officials, the arrests were made during the raids which have been termed as the "largest-ever investigation process till date".

The PFI was set up in 2006 and has now branches in over two dozen states and union territories including Kerala, Karnataka, Tamil Nadu, Uttar Pradesh, Delhi, Gujarat, Rajasthan, Maharashtra, West Bengal, Assam and Manipur.

Security agencies say the PFI is an offspring of the National Development Front which was formed after the demolition of the Babri Masjid and subsequent riots in 1993.

The Enforcement Directorate has also filed two chargesheets against the PFI in Lucknow.