Seeing the need to counter the ideology battle with the Rashtriya Swayamsevak Sangh (RSS), the Congress has decided to expand its reach among the children by launching Jawahar Bal Manch similar to 'Balagokulam' initiative of RSS. 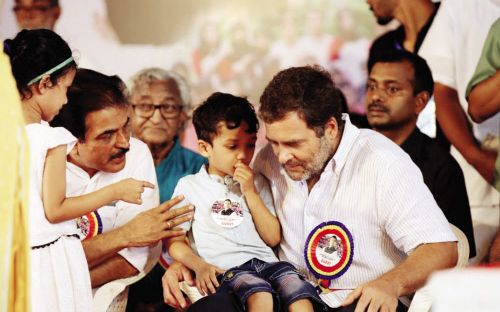 Rahul Gandhi with kids at a function in Kerala. File photo. | Photo: Mathrubhumi

New Delhi: Seeing the need to counter the ideology battle with the Rashtriya Swayamsevak Sangh (RSS), the Congress has decided to expand its reach among the children by launching Jawahar Bal Manch similar to 'Balagokulam' of RSS.

The department for children aged between 7 to 17 years aims to reinforce the party at the national level and propagate the secular ideology of the party.

However, the Kerala unit of the party has been running this initiative for the last 15 years.

Kerala leader G V Hari has been appointed as the president of the newly formed unit.

Hari told ANI, "Congress in Kerala has been running Jawahar Bal Manch for the last 15 years, through which about 2.5 lakh children have been trained so far. In view of its success, its need was felt at the national level, after which a pilot project was started in five states last year. After the official announcement by the Congress party, now the Kerala model of Jawahar Bal Manch will be expanded across the country."

"The children will be made aware and trained about the ideology of the Congress and the contribution of the party towards the country through camps, workshops, seminars and physical training."

Reacting to the question that how the Jawahar Bal Manch will be different from 'Balagokulam', the Congress leader said: "The fundamental difference is that of secularism."

"Kerala state president of Congress' student wing NSUI had once been a part of this program. However, only time will tell how successful the Jawahar Bal Manch of Congress will be successful at the national level," he said.

The kids will be able to join this campaign online.