The accident took place in Desri police station area of the north Bihar district, about 30 kms from the state capital, around 9 PM when the procession had gathered in front of a “peepal” tree on the roadside to offer prayers to a local deity “Bhumiya baba”. 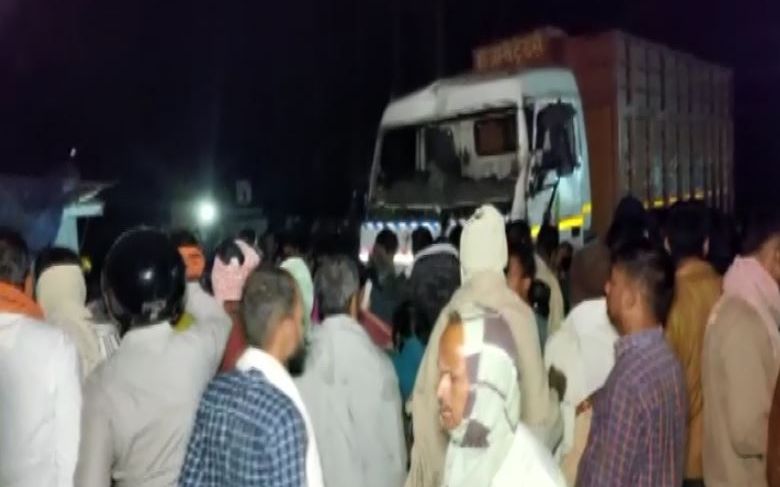 Truck that met with the accident in Vaishali | Photo: ANI

Hajipur: At least 12 people, a third of them children, were killed and several others were injured when a speeding truck ploughed into a religious procession in Bihar's Vaishali district on Sunday evening, officials said.

The accident took place in Desri police station area of the north Bihar district, about 30 kms from the state capital, around 9 PM when the procession had gathered in front of a “peepal” tree on the roadside to offer prayers to a local deity “Bhumiya baba”.

Prime Minister Narendra Modi expressed grief over the accident and announced an ex gratia of Rs 2 lakh to the next of kin of each deceased and Rs 50,000 to each injured persons.

"The accident in Vaishali, Bihar is saddening. Condolences to the bereaved families. May the injured recover soon. An ex-gratia of Rs 2 lakh from PMNRF (Prime Minister's National Relief Fund) would be given to the next of kin of each deceased. The injured would be given Rs 50,000," the PM said on Twitter.

RJD MLA Mukesh Roushan, under whose Mahua assembly constituency the site of the incident falls, rushed to the area and said “at least nine people have died on the spot. Many others have been taken to the Sadar hospital at Hajipur (the district headquarters), and three succumbed to injuries on the way. Those whose conditions are critical are being referred to hospitals in Patna”.

Vaishali Superintendent of Police Manish Kumar said “the procession was taken out as part of a custom associated with marriages. A wedding was scheduled in a few days at the house of a resident of Sultanpur village nearby. The driver of the truck speeding through the adjacent Mahnar-Hajipur highway lost control. He is stuck inside the mangled vehicle and we fear that he might have died”.

Locals claimed that the deceased included at least four children.

Chaos prevailed in the area as those who had lost their near and dear ones stood wailing beside the road while many others raised angry slogans alleging that the police reached after much delay.

The SP said, "We have summoned personnel from a number of adjoining police stations to speed up the rescue work and keep the law and order situation under control”.

Meanwhile, Chief Minister Nitish Kumar expressed grief over the accident and directed the district administration to ensure proper treatment to those who have been injured and speedy disbursement of ex-gratia, as per norms, among the next of the kin of each deceased.

Spanish couple travelling in India meets with accident in Thrissur