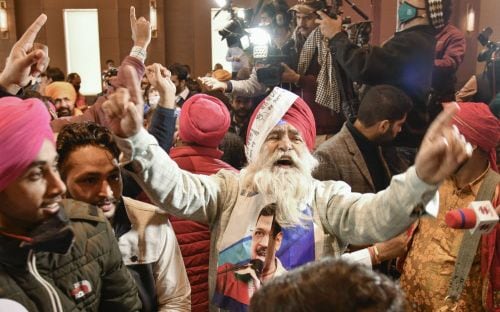 Chandigarh: Top Punjabi singers have descended into the electoral scene in Punjab, courtesy political parties seeking to cash in on their popularity to woo voters.

With Punjabi pop culture witnessing a heady rise, political parties believe that fielding popular singers will pull in crowds and connect them with the people.

Punjab will go to the polls on February 20.

With the Election Commission (EC) ban on rallies and roadshows by political parties following a surge in COVID-19 cases, top singer and now Congress' poll candidate Moosewala had been holding meetings.

The EC on Saturday extended the ban on physical rallies and roadshows till January 31 in the five poll-going states, but allowed public meetings with a maximum of 500 people in the constituencies going to poll in the first two phases and relaxed door-to-door campaign rules.

Moosewala, who has millions of fans including on social media, appeals to the electorate, "You have been casting votes to elect leaders but this time vote for your son".

Singer Anmol Gagan Mann and AAP's candidate from Kharar has launched a door-to-door campaign. During one such visit, she met a poor woman who broke down while showing the dilapidated condition of her house. Anmol tried to pacify her with an assurance that “everything will be alright” once her party “forms” the government.

Balkar Sidhu, while holding a meeting in Rampura Phul, appeals to voters to bring the AAP to power to make Punjab prosperous again.

He targets the Congress on drug and sacrilege issues.

The Congress has also tried to cash in on the celebrity appeal of actor and philanthropist Sonu Sood by fielding his sister Malvika from the Moga assembly segment.

It is not for the first time though that parties have tried to use the mass appeal of celebrities to woo the electorate, the trend has been tried in the past too.

Punjabi singer Mohammad Sadique is the Congress MP from the Faridkot constituency.

BJP's MP from Gurdaspur Sunny Deol is a popular actor. The constituency was earlier represented by late actor Vinod Khanna.

Besides, AAP's MP from Sangrur and party's chief ministerial face in the assembly polls Bhagwant Mann was a well-known comedian and satirist before he took the political plunge a decade ago.