Besides Uttar Pradesh and Goa, the counting of votes for the Assembly polls of the five states including Punjab, Uttarakhand and Manipur will be held on March 10. 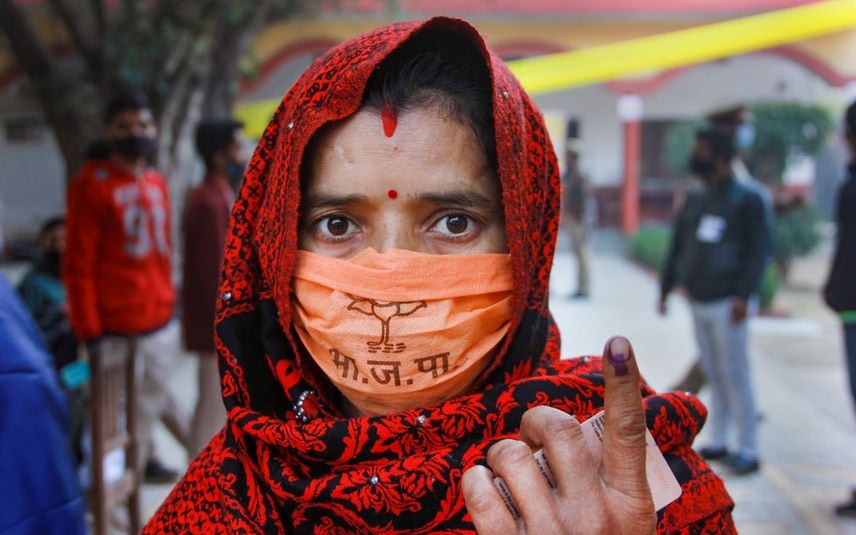 A woman shows her finger marked with indelible ink after casting their vote at a polling booth, during the second phase of Uttar Pradesh Assembly elections | Photo: PTI

Lucknow: Voting for Assembly elections in Goa and parts of Uttar Pradesh began on Monday.

The Bhartiya Janata Party (BJP) is the incumbent government in both states.

In Uttar Pradesh, where elections will be held to 403 assembly constituencies in seven phases, began voting for its second phase today. The first phase was held on February 10.

The voting will be held in nine districts of Uttar Pradesh including Saharanpur, Bijnor, Moradabad, Sambhal, Rampur, Amroha, Badaun, Bareilly and Shahjahanpur. Total 586 candidates are contesting in the second phase of the Uttar Pradesh Assembly elections.

As per the set norms, the campaigning for the elections in these states ended on Saturday (February 12) at 6 pm, marking the start of a 48-hour-long silence period.

Polling began across 70 Assembly constituencies in Uttarakhand at 8 am on Monday.

The Bhartiya Janata Party (BJP) is seeking to retain power in the hill state while Congress is hoping for a comeback. Both the Congress and the BJP have battled political instability in the state in the last two decades after it was carved out of Uttar Pradesh in 2000 during former prime minister Atal Bihari Vajpayee's tenure.

The BJP's task is a twin -- beat the anti-incumbency and also the electoral trend of the incumbent government voted out in the state. Uttarakhand, incidentally, has seen 11 Chief Ministers in the last two decades.

As per the set norms, the campaigning for the elections in these states ended on Saturday (February 12) at 6 pm.

Losing the last three elections on a streak, Congress veteran Harish Rawat is now contesting from a new assembly seat this time. He is in the electoral contest from Lalkuwa.

The new entrant into Uttarakhand politics, Aam Aadmi Party has fielded candidates on all 70 Assembly seats, with its Chief Ministerial face being Ajay Kothiyal.

Besides Uttar Pradesh and Goa, the counting of votes for the Assembly polls of the five states including Punjab, Uttarakhand and Manipur will be held on March 10. (ANI)