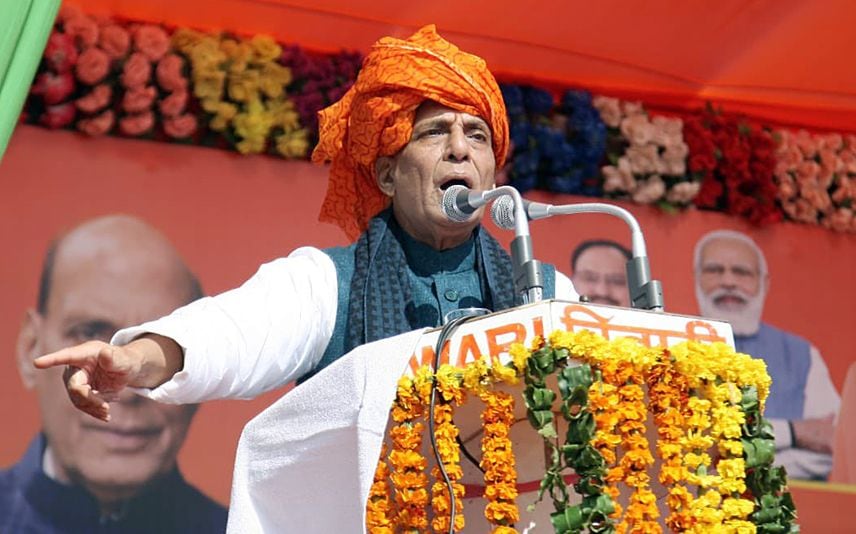 Addressing a gathering, Singh also said Pushkar Dhami will "neither stop nor bow" despite his simple and gentle nature.

Referring to the movie 'Pushpa', Singh said, "There are lots of discussions about a film these days. The name of the movie is Pushpa. Hearing Pushkar, Congress is considering him only as a flower. Our Pushkar is a flower as well as fire. This Pushkar Dhami will neither stop nor bow."

The Union Minister lauded Dhami for exemplary development in Uttarakhand in a very short time and mentioned that the Bharatiya Janata Party (BJP) government in the state has passed Rs 1 lakh crore for the development of the state in only one year.

He also hit out at the Congress party for targeting BJP for changing three Chief Ministers in Uttarakhand in five years, saying "it is our decision whom we keep in the post of Chief Minister"

"BJP is an ideological party. Here prominence is given to ideology, not to individuality. We have declared our CM face as Pushkar Singh Dhami. However, Congress is still not able to declare CM candidate in Uttarakhand. The spark is smoldering inside the Congress," said the Minister.

Singh said the BJP is talking about "Sabka Saath, Sabka Vikas, Sabka Vishwas and Sabka Prayas" while other parties including Congress are fighting elections with the help of "Ghar Ka Saath, own development, distrust of all and single effort".

"Whereas Congress neither has a leader nor intention nor any slogan. Congress looted the country, looted the state. BJP won't let you loot anymore. Their words are false, every promise is false. BJP won't give up any more," said Singh.

Noting that late former Prime Minister Atal Bihari Vajpayee created Uttarakhand and gave special status to it, Singh said when there were Congress governments both at the Center and in Uttarakhand, then the status of special hill states of Uttarakhand was withdrawn.

"When Modiji became Prime Minister in 2014, Uttarakhand was declared as a special category hill stat," said the Defence Minister.

The BJP leader further said the Congress has been "wiped out from the whole country and only lurking in the mountains".

"Clear it (Congress) from here (Uttarakhand) as well. I have come among you to make this appeal," Singh said.

The Minister also asserted that the BJP is determined to make Uttarakhand an "ideal and developed" state.

Singh appealed to people to cast their votes in favor of the BJP and to choose Dhami as their Chief Minister, promising "we will take all steps to make the state prosperous state".

Singh said that nearly 78 lakh voters will write the fate of Uttarakhand in this Assembly election which is slated to poll on February 14.

Uttarakhand will go for polls in one phase on February 14 and the votes will be counted on March 10.