U'khand polls fight between creators of state and those who conspired to block it: Modi 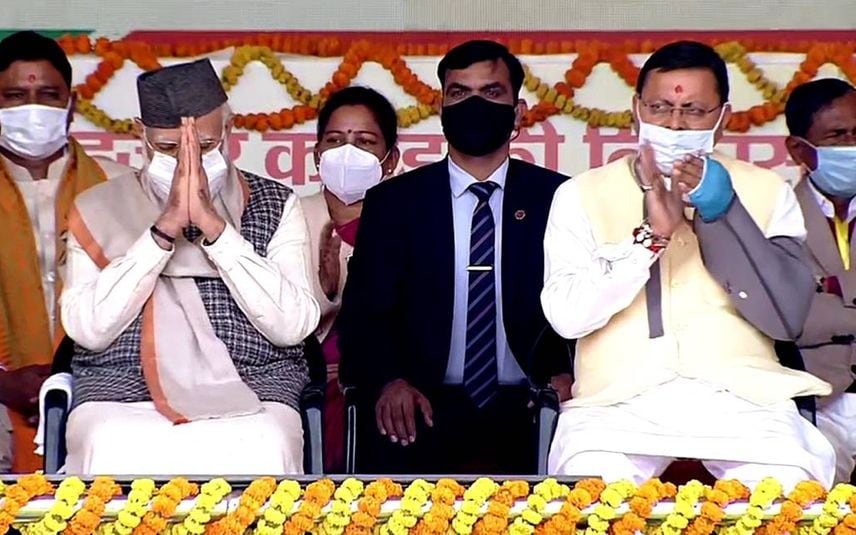 Dehradun: Prime Minister Narendra Modi on Monday said the upcoming Assembly election in Uttarakhand is a fight between those who created the state and those who "conspired to block its creation".

Addressing a rally in Haridwar virtually, he accused the previous Congress governments in Uttarakhand and at the Centre of not allowing development in the state as it was "created against the party's wishes".

"On one hand, there is BJP which under the leadership of Atal Bihari Vajpayee created Uttarakhand and on the other there are people who hatched all sorts of conspiracies to block its creation.

"Do you think that those who were against the creation of Uttarakhand will ever bring development here?" Modi asked.

He termed the previous Congress dispensations in the state and at the Centre as "double-brake" governments.

Non-implementation of the Rishikesh-Karnaprayag railway line during the Congress rule is a burning example of their "anti-development approach", he alleged.

"Work on the Rishikesh-Karnaprayag line was to start a decade ago. They spent only Rs 4 crore on such a big project from 2011 to 2014. But since we came to power at the Centre, nearly Rs 5,500 crore have already been spent on the long-awaited project," the prime minister said.

The dream of having a rail link in the hills will soon become a reality, he announced

Work on the Delhi-Dehradun highway, which was conceived during Vajpayee's tenure, also began under the "double engine" government of the BJP at the Centre and the state, the prime minister said.

The highway, the Doon-Delhi expressway and other connectivity projects will give a major boost to industrial and tourism activities besides generating employment opportunities in the state, he added.

"Generations have waited for the fulfilment of these dreams and we are working towards that goal."

Firing a broadside against the Congress, he alleged the grand old party has "committed the sin of throttling the dreams" of Uttarakhand. "The people of Uttarakhand will not forgive it," Modi said.

He alleged the Congress sees Uttarakhand as its ATM and is preparing to make a comeback to power in the state to "loot its resources". "It is their mindset."

To push Uttarakhand backwards, the Congress even compromised with national security by neglecting the development of border Modi alleged.

He said schemes like 'Vibrant Village' and 'Parvatmala' introduced in the general Budget will bring development to the border districts of Uttarakhand and its hills.

Modi said under the Namami Gange project, the Ganga is being cleansed.

"The previous government had declared one of the largest rivers of the world a canal at Har ki Pauri so that the mining mafia can play its game," he alleged.

"Those who never did anything for the development of the hills are coming up with new slogans every day. Even the reconstruction of Kedarnath picked up pace when the double-engine government took over," he said.

Modi said that schemes like Ujjwala Yojana had brought about a major change in the lives of poor women while the work on Jal Jeevan Mission is underway on a war footing.

"Uttarakhand is close to my heart. I have big plans for it. I had announced from the sacred land of Kedarnath that the decade belongs to Uttarakhand.

"So friends, don't waste this opportunity. Because, if a party which believes in putting brakes on development come to power it will be difficult for anyone to bring development to the state," he told the rally.

Modi appealed to the people to remember the "sins of the Congress" while casting their vote on February 14.

Vote for a "double-engine" government under the young leadership of Pushkar Singh Dhami so that the big development projects go on uninterrupted, he urged the people.

School Kalolsavam: Ekm student gets injured after slipping on stage during ...