Dhami versus Rawat: A tough battle on cards in Uttarakhand 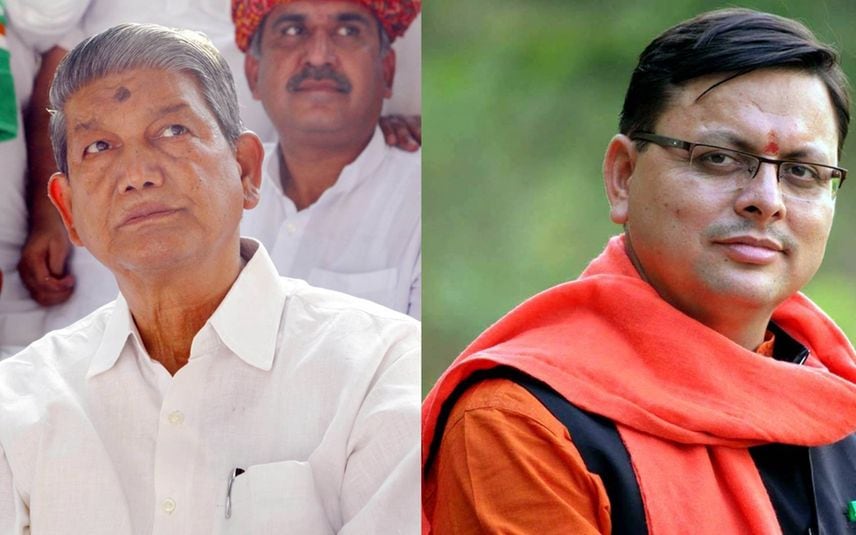 Dehradun: Barely six months after becoming Uttarakhand's youngest chief minister in July last year Pushkar Singh Dhami finds himself facing the onerous task of piloting the BJP to a second consecutive victory in the assembly polls against a redoubtable opponent like Harish Rawat who leads the Congress's do-or-die comeback battle.

Though Dhami is a fresh face and his six-month tenure gives a good account of him, achieving a huge target of getting more than 60 seats for the saffron party against a seasoned challenger like Rawat is anything but smooth.

Rawat had lost both the seats he had contested in 2017 but he continues to be one of the most popular faces in Uttarakhand politics.

He has also emerged as the most preferred chief ministerial face in several opinion poll projections of late.

Rawat is hopeful of reaping a rich harvest due to an anti-incumbency working in favour of the Congress. He raises the issues of BJP giving three chief ministers to the state in five years despite coming to power with a big majority, unemployment and inflation wherever he goes.

The trend of power oscillating between the BJP and the Congress every five years in Uttarakhand also strengthens the Congress's hope.

The BJP is confident of a win because of the big development projects launched for Uttarakhand in different sectors over the past five years.

Its leaders at their virtual meetings appeal to people to give another five years to the "double engine" government so that the projects which have the potential to change the lives of people could be completed.

However, the 46-year-old Dhami's task of recording an even bigger win for the party than in 2017 becomes more complex as he got a short span of just six months to perform and leave his mark.

He admits he got little time to perform but has the satisfaction of spending each moment of his short tenure to serve 1.25 crore people of the state.

“In a short span of just six months we took more than 550 decisions and acted on them. The previous Congress government only made announcements. They never saw the light of day while we acted on all the announcements we made,” Dhami asserted.

Though his tenure is short, it has been full of challenges as he had quite a few contentious issues to deal with like the anger of the priest community which had been agitating for months demanding dissolution of the Chardham Devasthanam Board, the raging second wave of Covid and the after effects of a shoddily handled Haridwar Kumbh which had earned it the tag of a Covid superspreader.

With a devastating spell of rain that struck in November killing a large number of people and causing large-scale damage to roads, bridges and railway tracks, there was indeed too much on his plate.

Though the disaster was comparable in scale with the 2013 Kedarnath calamity, the promptness of the government machinery helped save lives and minimise the damage.

Even Home Minister Amit Shah praised Dhami for his hands-on approach in handling the crisis, saying he had left little for the Centre to do.

Dhami also displayed his "political disaster management" skills soon after coming to power when he constituted a committee headed by Manohar Kant Dhyani to listen to all stakeholders and resolve the contentious Devasthanam Board issue.

Showing political acumen, he dissolved the Devasthanam Board and withdrew the related legislation to pacify angry priests who had already started preparations for contesting the polls.

Despite heading a cabinet of seasoned ministers far older than him, he succeeded in taking everyone along and keeping the BJP flock together with the only exception of Harak Singh Rawat who recently defected to Congress after being expelled from the party.

"Dhami through his hard work and no-nonsense approach has been able to counterbalance the anti-incumbency against his two predecessors to a large extent," a political observer here said.

Though the final judgement is in the hands of voters, few will doubt that Dhami has brought in a new flavour with his youthful and focused approach, BJP insiders said.

However, apart from propelling his party to a second consecutive victory at the polls, Dhami also has to break the trend of incumbent chief ministers losing the polls in Uttarakhand.

"Incumbent CMs never win in Uttarakhand. Nityanand Swamy lost in 2002, BC Khanduri lost in 2012 and Harish Rawat lost both the seats he contested in 2017," political analyst JS Rawat said.

ND Tiwari, the only CM of Uttarakhand to complete his full five-year term did not contest in 2007 when he was the sitting chief minister, he said.

"As tradition has it, CM candidates in Uttarakhand have to fight not only their opponents on the other side but also rivals within," he said.

Dhami is pitted against PCC working president Bhuwan Chandra Kapri in Khatima whom he had defeated in the 2017 assembly polls by a margin of 2,709 votes.

In 2012, he had defeated Devendra Chand of the Congress by more than 5000 votes in Khatima.

The presence of the Aam Aadmi Party's former state president SS Kaler in the fray in Khatima may give a new twist to the contest on the seat which Dhami has been winning for two consecutive elections.

"The sizeable population of Sikhs and farmers in Khatima may also work against Dhami as despite the withdrawal of the three farm laws by the Centre, the issue is still alive," J S Rawat said.