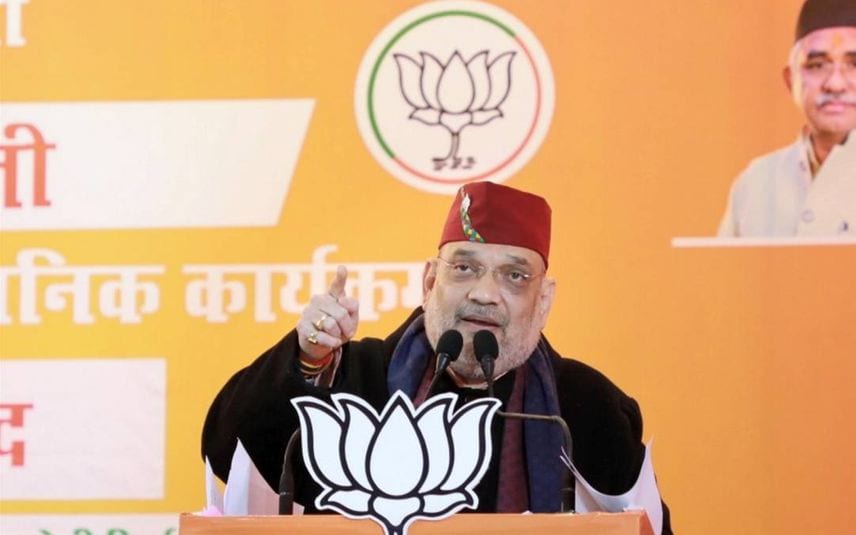 Rudraprayag: Union Home Minister Amit Shah on Friday slammed the Congress in Uttarakhand saying the Harish Rawat government was known for "corruption and scams" and even opposition cannot level allegations of "corruption" against the BJP government in the state.

Shah took a jibe at Congress leader Harish Rawat for changing his seat. A former Uttarakhand Chief Minister, Harish Rawat is the face of the party's campaign in the state.

"Harish Rawat has finally secured his seat by moving here and there. He had to travel a lot for the seat. I will only tell him that you have done a lot for Uttarakhand but now it's our young chief minister's turn," he said.

Amit Shah alleged that Congress "neither gave respect to Babasaheb Bhimrao Ambedkar nor they gave rights to people from Schedule Caste community" but Prime Minister Narendra Modi did many works to propagate Ambedkar's legacy and has worked with dedication for the deprived sections.

"Modiji has done many things for the country. The government has initiated many schemes for the education of daughters," he said.

The Home Minister said that the soldiers from Uttarakhand are protecting the country's borders from Ladakh to Kutch with great valour.

"I have come to tell all of you that the BJP government leaves no stone unturned to work for the soldiers. Defence personnel are the top priority of the BJP government. Narendra Modiji has embodied this in the schemes of the government, not in speeches," he added.

"Whether as the Chief of the Army Staff or as the country's first CDS, General Bipin Rawat always made earnest efforts to secure the country's borders and modernize the three forces. The whole nation can never forget his contribution," he said.

Amit Shah said the BJP government is working towards modernizing the Army and producing weapons within the country in an effort towards Atmanirbhar Bharat.

He urged people to give chance to BJP for another five years so that the big projects already underway are completed.

"You gave us your blessings in 2014 and 2019 by giving us all the five Lok Sabha seats. Then you gave us a massive mandate in 2017, giving us 57 out of the 70 assembly seats. You have seen the work done by us. You have to vote for good governance for another five years so that the big projects already underway are completed," he said.

The Home Minister said the BJP has given the leadership of the state to a young leader Pushkar Singh Dhami.

He said BJP government in the state will ensure that there is no forced migration outside the state for jobs.

"Under his (Pushkar Singh Dhami's) energetic and passionate leadership, BJP will work to take Uttarakhand to the top of development indices in the coming five years as well. In the coming times, the youth of Devbhoomi should not have to migrate, this type of government will be given to Uttarakhand," he added.

Polling to elect the 70-member Uttarakhand Legislative Assembly will be held on February 14. The counting of votes will take place on March 10.