19 per cent polling recorded in Uttarakhand till 11 am 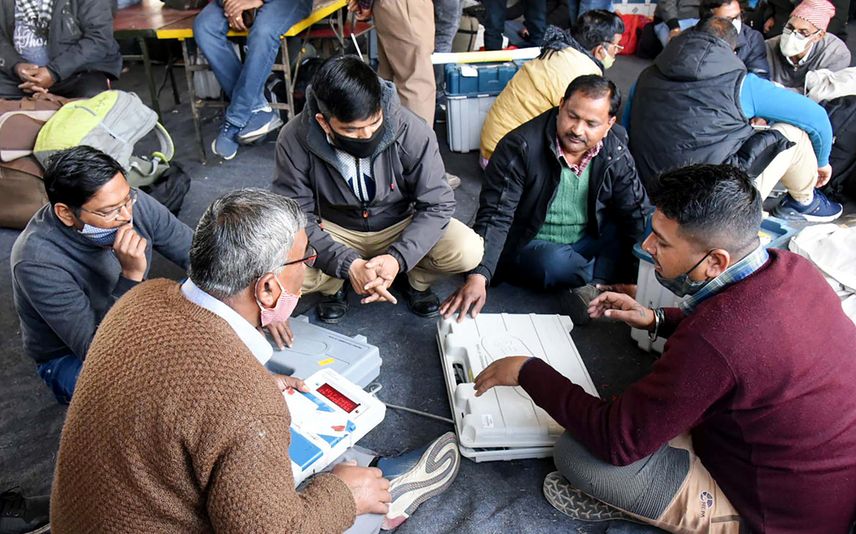 Dehradun: Long queues of voters were seen outside polling booths as polling began on Monday at 8 am to the 70 assembly seats spread over 13 districts of Uttarakhand.

By 11 am 18.97 per cent polling was recorded in the state, election commission officials here said.

Dhami cast his vote in Khatima, Trivendra in Dehradun, Kothiyal in Uttarkashi and Ramdev at a polling booth in Kankhal in Haridwar.

Talking to reporters after casting his vote Ramdev appealed to people to come out in large numbers to exercise their right to franchise. He also asked them to rise above cast creed and religious considerations to vote for a strong nation and its interests.

On the ongoing Hijab controversy, Ramdev said Asaduddin Owaisi was living in the 18th century.

"These are minor things when compared to national interest which is paramount. People should reject political, intellectual and religious terrorism and vote for the country," he said.

This is the fifth assembly polls being held in the politically volatile hill state since its creation in 2000.

A public holiday has been declared by the administration for the single-day polling in the state.

The ruling BJP is seeking a consecutive second term in office in the state while the Congress is trying to make a comeback after being routed at the hands of the BJP in the 2017 assembly polls.

The Aam Aadmi Party which has also thrown its hat in the ring this time. It has declared Col Ajay Kothiyal as its chief ministerial candidate.

A total of 81,72,173 voters in the state will decide the fate of 632 candidates in the fray including 152 independents in these elections.

36,095 police, central para-military and PAC forces have been deployed on poll duty across the state.

There are 11,697 polling booths spread over 8,624 locations, chief electoral officer Saujanya who does not use a surname said.

For the first time 101 all women 'Sakhi' polling booths run by women have been set up in the state to encourage women's participation in the polling process.

Similarly, six polling booths to be manned by differently abled persons have also been set up, she said.