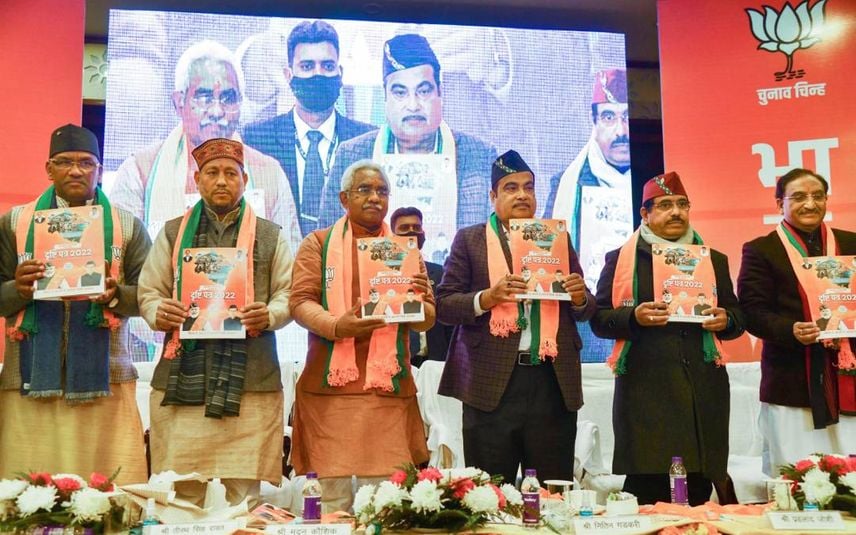 Dehradun, Feb 9 (PTI) The BJP on Wednesday assured poor farmers Rs 6,000 per year, in addition to what they get under the PM-Kisan scheme, in its Utarrkhand poll manifesto which also promised to increase the jail term under state's anti-conversion law to 10 years.

Releasing the BJP's manifesto ahead of the Uttarakhand Assembly polls, Union Road Transport and Highways Minister Nitin Gadkari also promised Rs 2,000 per month to women heads of Below Poverty Level (BPL) families, and an additional Rs 1,000 to them to take care of their small children.

Under the PM-Kisan scheme, a financial benefit of Rs 6,000 per year is provided to the eligible farmer families, payable in three equal installments of Rs 2,000.

"An additional Rs 6,000 will be paid to farmers by the state government taking the amount to be paid to farmers per annum to Rs 12,000," Manifesto committee coordinator and former chief minister Ramesh Pokhriyal Nishank said at the event.

"The law against 'love jihad' will be made stricter through an amendment and those found guilty under the law will be sentenced to 10 years' rigorous imprisonment," the manifesto said.

The Uttarakhand government had a few months back said it is contemplating making the state's anti-conversion law more stringent, providing for jail terms up to ten years.

'Love Jihad" is a term often used by the BJP to refer to conversions allegedly through force or deceit.

The vision document includes payment of an additional Rs 6,000 to farmers per annum over and above the Rs 6,000 they get at present under the PM Kisan Samman Nidhi, and Rs 2,000 per month to women heads of BPL families as well as an additional Rs 1,000 to them to take care of their small children.

The document also promises setting up an empowered committee to look into demographic changes taking place in the hill districts, a separate fund of Rs 500 crore for women self-help groups, and also separate funds of Rs 500 crore each for horticulture and dairy development.

The vision document also promises to help settle ex-servicemen in border districts under the "Him Prahari" yojana, and creation of a credit guarantee fund trust for them.

A policy of zero tolerance to drugs will be adopted and an empowered committee will be set up in every district to look into demographic change due to illegal land grabbing, it said.

Haridwar will be developed into an interntional yoga capital and infrastructure in the Chardham circuit will be expanded, it said.

"There are three important pillars of the manifesto - ethics, economy, ecology and environment," Gadkari said after releasing it.

"It is a vision of Uttarakhand's future," the Union minister said.

Introducing the salient features of the vision document, Ramesh Pokhriyal Nishank said it is modelled on suggestions received directly from people in 70 constituencies of the state, and is reflective of their aspirations.

"Not a single section of the society has been left out of the vision document which has been tailored according to the visions of Atal Baihari Vajpayee who created it and Prime Minister Narendra Modi who wants it to develop as a leading state in the country when it celebrates 25 years of its existence," he said.

State BJP president Madan Kaushilk said unlike the manifestos of other political parties, it has not been prepared in a closed room.

"It is based on the suggestions of common people and our discussions held with a cross section society throughout the state. Hence, it truly represents their aspirations," he said.