The deaths were reported from Hojai, Nalbari, Bajali, Dhubri, Kamrup, Kokrajhar, and Sonitpur districts of Assam. 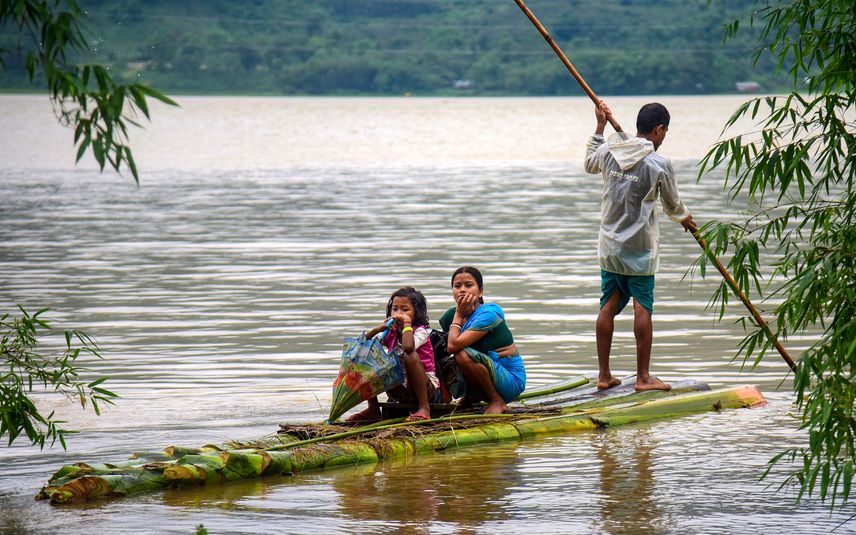 Villagers use a makeshift boat to move to a safer place from a flood-affected area following heavy rainfall in Goalpara district | Photo: PTI

Guwahati: As many as nine more persons died in Assam due to the flood, taking the overall death toll to 54, according to Assam State Disaster Management Authority (ASDMA) on Friday.

As many as 18.94 lakh people in 28 districts are affected by the flood situation.

The deaths were reported from Hojai, Nalbari, Bajali, Dhubri, Kamrup, Kokrajhar, and Sonitpur districts of Assam.

So far 54 people in the state have lost their lives in floods and landslides this year so far. As per the state data, 2,930 villages under 96 revenue circles are currently underwater.

The flood waters have submerged 43338.39 hectares of cropland in the flood-hit districts. The water level of Beki, Manas, Pagladiya, Puthimari, Jia Bharali, Kopili and Brahmaputra rivers are flowing above the danger level mark in many places of the state.

As many as 1,08,104 flood-affected people are currently, taking shelter at 373 relief camps set up by the district administration. Of which, 3.55 lakh people have been affected alone in Bajali district followed by 2.90 lakh people affected in Darrang, 1.84 lakh in Goalpara, 1.69 lakh in Barpeta, 1.23 lakh in Nalbari, 1.19 lakh in Kamrup and 1.05 lakh in Hojai district.

Meanwhile, the flood situation in Assam's Kamrup district deteriorated after the flood waters entered new areas affecting more than 70,000 people in the area.

Earlier on Thursday, Assam Chief Minister Himanta Biswa Sarma thanked Bollywood actor Arjun Kapoor and director Rohit Shetty for their contribution of Rs 5 lakhs to the CM Relief Fund for the flood-affected people in the state.

Withdraw authoritarian order to MPs on protests within Parliament: CPM