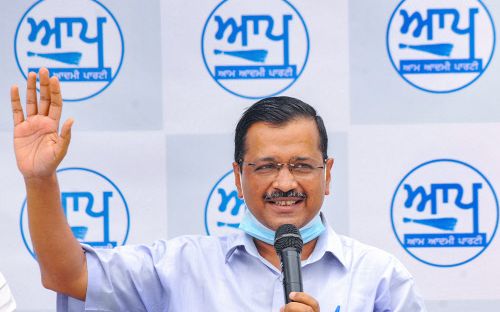 Dehradun: Delhi Chief Minister Arvind Kejriwal on Sunday promised to introduce a free pilgrimage scheme for the people of different communities in Uttarakhand if the Aam Aadmi Party came to power in the state.

Under the scheme, Hindus will be taken to Ayodhya, Muslims to Ajmer Sharif and Sikhs to Kartarpur Sahib, Kejriwal announced at a press conference in Haridwar.

"We introduced a free pilgrimage scheme for the elderly in Delhi under which they are taken in the comfort of AC trains for free to 12 pilgrimage destinations all over the country, including Haridwar, Rishikesh, Vaishno Devi and Puri," the AAP national convener said.

He said 36,000 people have already availed the scheme under which people are selected every year for pilgrimages.

Kejriwal said the idea of adding Ayodhya to the list of destinations under the free pilgrimage scheme came to him when he visited the city recently to pay obeisance to Ram Lalla. "I want to give all our elders the experience of going on a free pilgrimage to Ayodhya ji and have a darshan of Ram Lalla," he said.

Kejriwal said he was happy to announce that a train will start from Delhi on December 3 to take people to Ayodhya for free.

"A similar free pilgrimage scheme for the people in Uttarakhand, on the lines of Delhi, will be introduced if we are voted to power in the state," Kejriwal said.

"Hindus will be taken to Ayodhya under the scheme, while there will be a provision to take Muslims to Ajmer Sharif and Sikhs to Kartarpur Sahib which was opened recently," the AAP leader said.

Kejriwal said the AAP is the first party in the country to focus on the problems faced by the common people.

"Our emphasis is on good hospitals, good schools, good roads, clean drinking water and employment opportunities. Now we will also offer people free pilgrimages. This shows our focus is on common people," he said.

The Aam Aadmi Party is all about common people, he said.

He asked how many political parties today talk about good hospitals and good schools.

Claiming that his party changed Delhi when people gave it a chance, Kejriwal asked for just one opportunity for the AAP to serve Uttarakhand.

"We changed Delhi thoroughly when we were given a chance. Give us just one opportunity in Uttarakhand. You will forget about all political parties," he said.

Kejriwal also held a meeting with autorickshaw drivers in Haridwar and promised to address their problems as he had done in Delhi, if the AAP forms the government in the state.

"I will work like your elder brother. Your problems are now my responsibility," he said, adding that autorickshaw drivers in Haridwar have to struggle on a daily basis to make ends meet.

The auto-rickshaw drivers of Delhi are admirers of the AAP and played a vital role in its victory, he said.

Kejriwal has been promising freebies to the people of Uttarakhand which goes to polls early next year.

He had promised free electricity for farmers and up to 300 units to every household at no cost during one of his earlier visits to the state.

Later, accompanied by AAP's chief ministerial candidate for Uttarakhand Col (Retd) Ajay Kothiyal and other party leaders, Kejriwal also staged a roadshow from Ranipur Mod to Ashram Chawk in Haridwar waving to cheering crowds. People were also seen standing on their rooftops and balconies waving to the AAP leader.