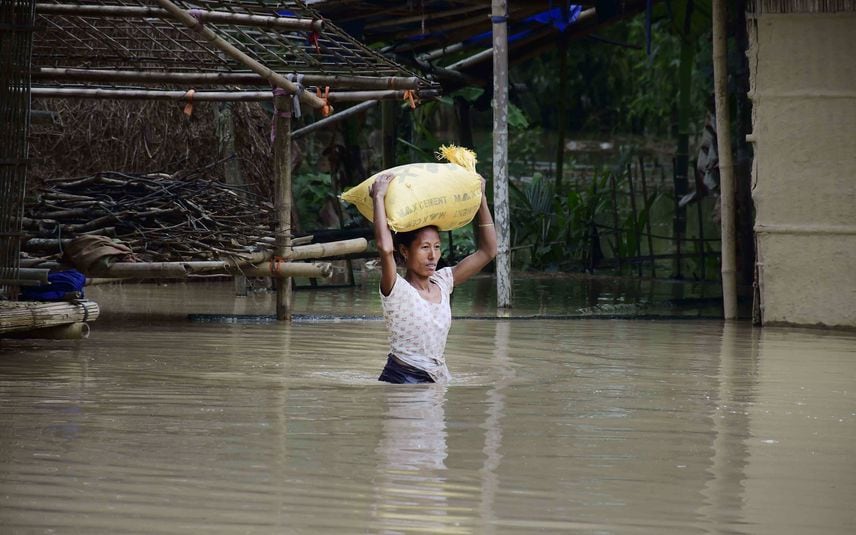 A villager carries her belongings on her head as she wades through a waterlogged area following heavy rainfall at Garukhunda village, in Nagaon district | Photo: PTI

Guwahati: Around 2 lakh people in 20 districts of Assam have been affected by floods, with the hill district of Dima Hasao getting cut off from the rest of the state after landslides triggered by incessant rain snapped rail and road links, an official bulletin said on Monday.

Two flood-related deaths were reported in Cachar district, while three fatalities due to landslides were earlier recorded in Dima Hasao.

Around 1,97,248 people have been affected by the deluge, with Hojai and Cachar being the worst hit with 78,157 and 51,357 people affected population respectively, the Assam State Disaster Management Authority (ASDMA) bulletin said.

Altogether 652 villages in 46 revenue circles in 20 districts have been affected so far, it said.

Around 55 relief camps have been opened in seven districts, sheltering 32,959 people. Another 12 relief distribution centres are also operational in different affected districts.

Embankments have been breached at 16 locations in different districts in the last 24 hours.

Roads, bridges and houses have been completed or partially damaged in several areas.

Communication channels have also been snapped in Dima Hasao.

"Due to landslides, the district cannot be approached from outside. All roads and railways leading to Haflong is blocked since May 15," the bulletin said.

A Northeast Frontier Railway (NFR) release in Guwahati said evacuation of about 2,800 passengers of two trains, which were stranded along the Lumding-Badarpur section in Dima Hasao for the last two days due to landslides and waterlogging on tracks, was completed on Monday.

Many passengers were airlifted by the Indian Air Force even as incessant rain impeded rescue operations which were underway since Saturday, it said.

"Having rescued and evacuated all the passengers, the Railways is now putting its efforts in restoring the damaged line and re-starting the train services to South Assam, Manipur, Tripura and Mizoram," it said.

The New Haflong Railway Station is completely inundated with debris and an empty passenger train standing at the station has been washed off from the tracks due to a massive landslide, it said.

Around 18 trains have been cancelled and more than 10 short-terminated as work for restoration of the damaged railway tracks are underway despite the rain.

LDF backs UDF candidate to throw NDA away from power in Kodamthuruth panchayat ...