He also said that the morale and motivation of Indian Armed Forces is very high, and the soldiers are committed to overcome any challenge that might come their way. 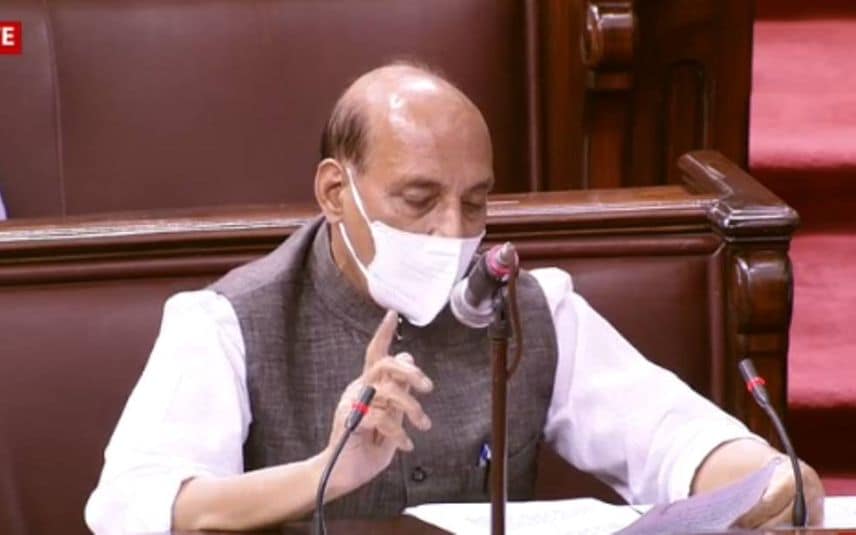 New Delhi: Special warm clothes, special tent for living and adequate arrangement of weapons and ammunition have been made for Indian Army soldiers to cope with the extreme weather conditions at the Line of Actual Control, Defence Minister Rajnath Singh informed the members of Rajya Sabha on Thursday as border tension continued with China.

"The spirits of our soldiers are high. They are capable of serving at forbidding altitudes with scarce oxygen and in extremely cold temperatures, something that they have effortlessly done over the last many years on Siachen, and Kargil," the Defence Minister said.

He also said that the morale and motivation of Indian Armed Forces is very high, and the soldiers are committed to overcome any challenge that might come their way.

This time also, soldiers have chosen patience and courage over aggression. "Our soldiers are a living symbol of restraint, bravery and valour," he said. The minister detailed the House about ongoing border tension.

Since April, India had noticed a build-up of troops and armaments by the Chinese side in the border areas adjacent to Eastern Ladakh.

In early May, the Chinese side had taken action to hinder the normal, traditional patrolling pattern of our troops in the Galwan Valley area, which resulted in a face-off.

Even as this situation was being addressed by the Ground Commanders as per the provisions of our bilateral agreements and protocol, in mid-May the Chinese side made several attempts to transgress the LAC in other parts of the Western Sector.

This included Kongka La, Gogra and North Bank of Pangong Lake. These attempts were detected early and consequently responded to appropriately by our armed forces.

"We made it clear to the Chinese side both through diplomatic and military channels that China was, by such actions, attempting to unilaterally alter the status quo. It was categorically conveyed that this was unacceptable," the minister said.

Given the growing friction along the LAC, the Senior Commanders of the two sides in a meeting on June 6, 2020 agreed on a process of disengagement that involved reciprocal actions. Both sides also agreed to respect and abide by the LAC and not undertake any activity to alter the status quo.

However, in violation of this the Chinese side precipitated a violent face off on June 15 at Galwan in which 20 Indian soldiers were killed. "Our brave soldiers laid down their lives and also inflicted costs including casualties on the Chinese side," he said.

The minister said that while no one should doubt our determination to safeguard our borders, India believes that mutual respect and mutual sensitivity are the basis for peaceful relations with neighbours.

"As we want to resolve the current situation through dialogue, we have maintained diplomatic and military engagement with the Chinese side," he said.

In these discussions, India have maintained the three key principles that both sides should strictly respect and observe the LAC, neither side should attempt to alter the status quo unilaterally and all agreements and understandings between the two sides much be fully abided by in their entirety.

However, it is apparent from Chinese activities that their words don't match their actions.

A case in point is that even when the discussions were going on, the Chinese side again engaged in provocative military manoeuvres on the night of August 29 and August 30 in an attempt to change the status quo in the South Bank area of Pangong Lake.

But yet again, timely and firm actions by our armed forces along the LAC prevented such attempts from succeeding.

As is clear from these events, the Chinese actions reflect a disregard of our various bilateral agreements.

The amassing of the troops by China goes against the 1993 and 1996 Agreements.

Respecting and strictly observing the Line of Actual Control is the basis for peace and tranquility in the border areas and explicitly recognized in both 1993 and 1996 agreements.

While Indian Armed Forces abide scrupulously by it, this has not been reciprocated by the Chinese side. Their actions have led to face-offs and frictions from time to time along the LAC.

He also said that as of now, the Chinese side has mobilized a large number of troops and armaments along the Line of Actual Control as well as in the depth areas.

There are several friction areas in Eastern Ladakh including Gogra, Kongka La and North and South Banks of the Pangong Lake.

"In response to China's actions, our armed forces have also made appropriate counter deployments in these areas to ensure that India's borders are fully protected," the minister apprised the House.