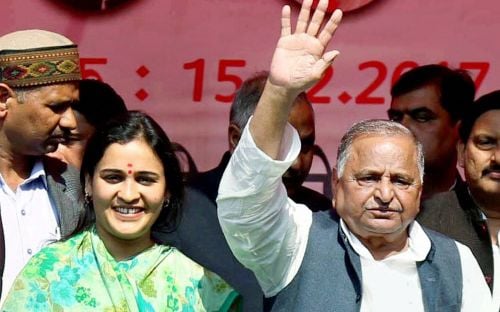 She is expected to meet BJP president JP Nadda after joining the party on Wednesday.

According to the sources, Aparna Yadav has sought a ticket from the Lucknow Cantt assembly seat.

Amid the talks of Aparna Yadav joining the BJP, Samajwadi Party chief Akhilesh Yadav had also said that BJP members are worrying more about his family than about themselves.

Aparna Yadav has in the past lauded some initiatives of the BJP government. She also donated Rs 11 lakh to the construction of the Ram Temple in Ayodhya.

There are many contenders for Lucknow Cantt seat in the BJP. Apart from Deputy chief minister Dinesh Sharma, Rita Bahuguna Joshi is also seeking a ticket for her son from the seat.

Elections to the 403 assembly constituencies in Uttar Pradesh will be held in seven phases starting February 10.

Sasaram: Union Home Minister Amit Shah said on Saturday that the health sector saw incremental work in the first 70 years after Independence but the Modi ..

Efforts on to repatriate 13 fishermen including Keralites detained in Indonesia, Seychelles

Thiruvananthapuram:Indian Missions in Indonesia and Seychelles are closely following with the local authorities the issue of detention of 13 Indian fishermen ..

79,237 Indian pilgrims, including 2,000 women without mehram, will go for Haj this year

New Delhi: After a gap of two years due to the COVID pandemic, the Haj yatra will begin this year as usual, announced the Saudi government.However, with ..