Alleging that the protests across the city are not "coincidental" but "experimental", he said Delhi's ruling AAP and the Congress were provoking people and misinforming them and asked voters to back the BJP because Delhi could not be left to anarchy 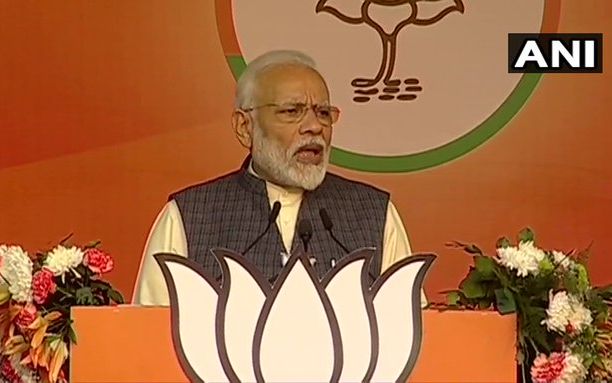 X
New Delhi: The anti-CAA protests in Seelampur, Jamia Nagar and Shaheen Bagh are not a coincidence but part of a political design to harm national harmony, Prime Minister Narendra Modi said on Monday while accusing the AAP and the Congress of fuelling the demonstrations.
Addressing a rally in east Delhi ahead of the February 8 Delhi assembly elections, the prime minister referred to his government's initiatives for the city and for the country, made promises and also put the spotlight on the protests over the Citizenship (Amendment) Act.
Alleging that the protests across the city are not "coincidental" but "experimental", he said Delhi's ruling AAP and the Congress were provoking people and misinforming them and asked voters to back the BJP because Delhi could not be left to anarchy.
The two parties were keeping the Constitution and tricolour in the forefront, but the aim was to "divert attention from the real conspiracy", Modi said in his 55-minute speech in Karkardooma.
Referring to the protests in Shaheen Bagh, on the Delhi-Noida border, he said people commuting to and from the satellite city are facing a lot of problems.
The Shaheen Bagh protests have taken centrestage in the BJP poll campaign with the top party leadership raking it up in every rally. The BJP has also accused the AAP of supporting the protests at Shaheen Bagh.
The people of Delhi are quiet and they are angry watching this vote bank politics, he said.
"If the strength of those plotting a conspiracy increases, then another road or lane will be blocked. We can't leave Delhi to such anarchy. Only people of Delhi can stop this. Every vote given to the BJP can do this," he said.
"Be it Seelampur, Jamia (Nagar) or Shaheen Bagh, for the last several days, there have been protests over the Citizenship (Amendment) Act. Are these protests coincidental? No, this is not coincidental, it is an experiment," he added.
Behind the protests, Modi said, is a political design aimed at harming national harmony.
"In the India of 21st century, politics of hate will not work. Only politics of development will," he said.
Modi said the Supreme Court and the High Court have expressed their dissatisfaction over the violence during protests and the destruction of property.
"But these people don't care about courts. They don't accept what the court says and talk about the Constitution," he said.
In December, several parts of the national capital witnessed widespread protests against the amended citizenship act.
Modi also took a swipe at the Congress saying those who questioned the Batla House encounter are now saving those who raised 'tukde tukde' slogans.
He also slammed the AAP and Chief Minister Arvind Kejriwal and said they questioned the Army on surgical strikes.
Modi listed out a series of measures taken by his government to address the issues of the national capital, touching on national issues like the revocation of special provisions of Article 370, construction of a Ram Temple and bringing in the Citizenship Amendment Act for persecuted minorities from Pakistan, Afghanistan and Bangladesh.
Seeking to reach out to traders and the common person, he also detailed steps in the budget for them.
Modi said his government was finding solutions to decades-old problems affecting the country and cited the regularisation of unauthorised colonies to assert that the BJP had fulfilled its promise to the people of Delhi.
The move is expected to benefit over 40 lakh residents of the national capital.
"We delivered on our promise to people of Delhi that we will regularise unauthorised colonies," Modi said.
Modi also accused Kejriwal of playing politics over health and housing by not implementing the central government's flagship schemes Ayushmaan Bharat and Pradhan Mantri Awas Yojana.
The Kejriwal-led party will continue to stall welfare schemes for people if it is voted back to power, he said.
He also promised that the BJP-led Central government will provide 'pucca' houses to all poor families by 2022.
The BJP, he added, believes in positivity and the interest of the country is supreme for the party.
PTI