The Met department forecast light to moderate rainfall at most places with heavy to very heavy rainfall at isolated places over coastal Odisha and north coastal Andhra Pradesh. 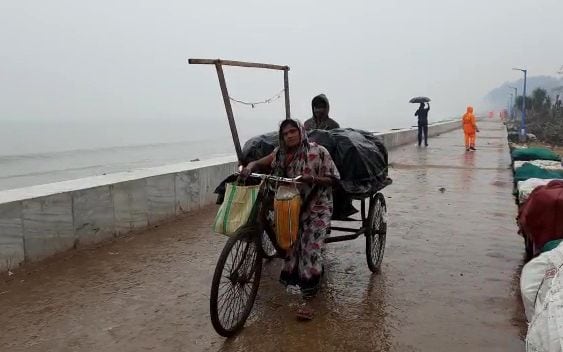 A woman pulls a cart carrying her belongings amid heavy rainfall triggered by the Cyclone 'Jawad' | Photo: ANI

Visakhapatnam: People in north coastal Andhra Pradesh heaved a sigh of relief on Saturday as the cyclonic storm 'Jawad' over west-central Bay of Bengal weakened into deep depression and headed towards Odisha coast after changing its course.

According to the India Meteorological Department (IMD), the deep depression lay at 17:30 hours about 180 km east-southeast of Visakhapatnam.

The Met department forecast light to moderate rainfall at most places with heavy to very heavy rainfall at isolated places over coastal Odisha and north coastal Andhra Pradesh.

Earlier, Chief Minister Y.S. Jagan Mohan Reddy had held a video conference with the district collectors of Srikakulam, Vizianagaram, Visakhapatnam, and East and West Godavari districts to discuss the precautionary measures to be taken.

He had directed the officials to be cautious to ensure that there is no loss of human lives and to keep Rs 10 crore available for each district for relief measures and other works.

Meanwhile, the South Central Railway (SCR) has announced cancellation of a few trains in view of the cyclonic storm. The trains include Guwahati-Secunderabad, Kamakhya-Yeshvantpur, Mumbai CST-Bhubaneshwar, Rameswaram-Bhubaneswar, Kacheguda-Vasco da Gama and Okha-Puri.

Heavy rain likely in Kerala for next 3 days; orange alert in 2 districts on Monday