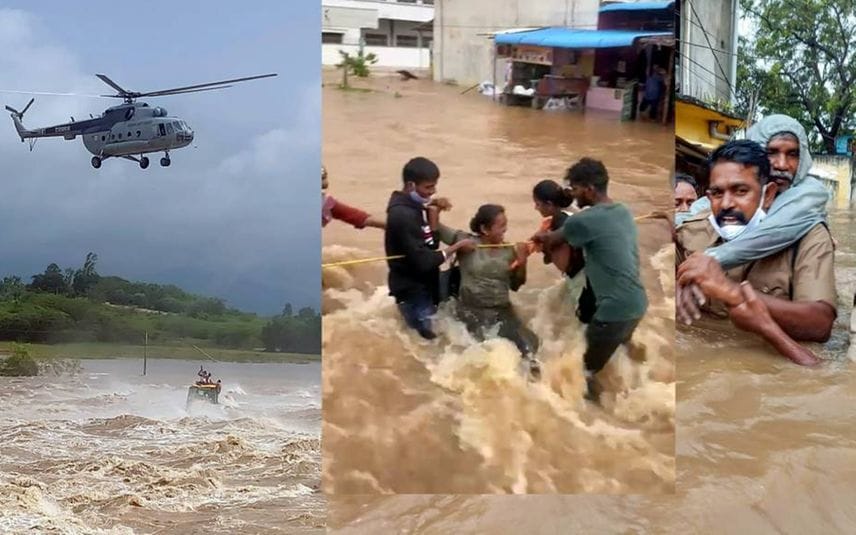 The death toll rose to 29, while 1,316 villages have been inundated according to the authorities. With further rainfall expected, the state government has put rescue and relief support on standby mode.

Taking to the skies on Saturday, the Chief Minister reviewed the rain damage inflicted in Kadapa, Renigunta, Tirupati cities. He also surveyed the Peruru project, and Swarnamukhi river areas, along with inundated areas affected by Papagni and Penna rivers.

Arriving at Kadapa Airport, the chief minister interacted with the Navy personnel engaged in relief operations. He also spoke to local MLAs, and district authorities regarding the relief measures.

The chief minister also inspected the Veligallu and Annamayya project area which was severely damaged due to floods.

Reddy also surveyed Pincha project and the areas affected by the Cheyyeru River and other flood-prone areas.

He also directed the officials to take immediate sanitation measures in Tirupati city and prepare a master plan on the drainage system in the city to take appropriate action.

Officials said that 500 personnel have already been deployed from various municipalities for the relief operations and to clear the trash that has accumulated in the streets and blocked the drains.

The Chief Minister directed officials to speedily prepare crop damage estimates, and take up measures to support the farmers. The authorities have been tasked with providing immediate financial assistance to the flood-hit households and to assist them when they return to their homes.

The TTD chairman YV Subba Reddy said on Saturday that the hill-top temple town of Tirumala has faced the worst rain damage in three decades. He said that temple property worth Rs 4 crore has suffered damage due to the massive rains.

Thiruvananthapuram: President Ram Nath Kovind will open the two-day National Women Legislators' Conference-2022, which is expected to be attended by a ..

New Delhi: With an eye on the 2024 parliamentary elections, the BJP kick-started a week-long campaign on Wednesday to strengthen the organisation and boost ..