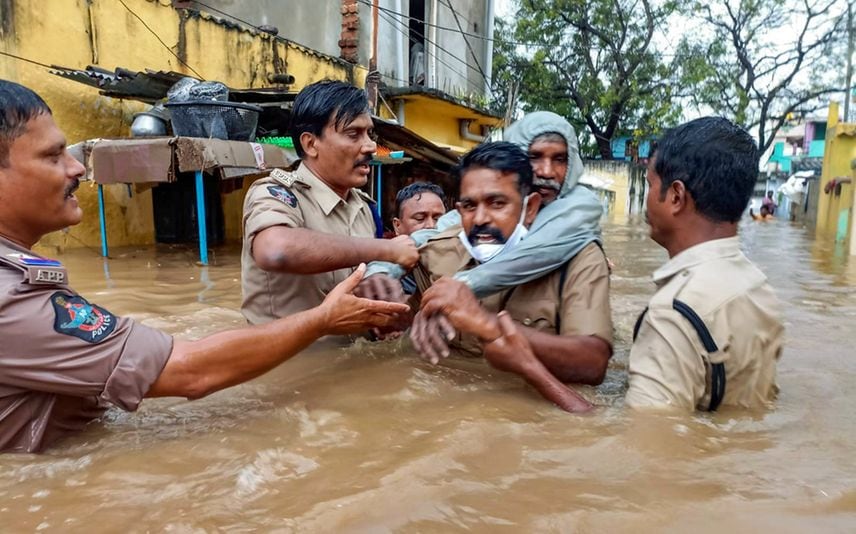 A policeman carries an old man on his back to evacuate him from a flooded area at Rajampet in Kadapa district | Photo: PTI

Anantapur (Andhra Pradesh): Three children and a woman lost their lives after a three-storey building collapsed due to heavy rains in Andhra Pradesh's Anantapur.

According to the police, more than four people are still trapped inside the building rubble.

"The building collapsed at around 3 am in the Kadiri town of Anantapur district. The three-storey old building was constructing another two floors by sharing the wall with an adjacent building," Circle Inspector Satyababu said.

Rescue operation is underway. More information on the matter is awaited.

At least 30 people are dead or missing after flash floods hit southern India on Saturday, with three buses washed away in one incident.

Rescue teams pulled out a dozen bodies after three buses were washed away in Andhra Pradesh on Friday. At least 18 other people were still missing, media reported.

Dozens have died since October in India after heavy rains triggered floods and landslides, and the country's Met office said more heavy rains were expected in several southern areas on Saturday.

At least 42 people were killed last month when heavy rains pummelled Kerala, and on Friday authorities in the state halted entry to Sabarimala, one of Hinduism's holiest shrines, due to heavy rains in the area.

Hundreds of devotees have been making the trek to Sabarimala since the shrine opened last week for the annual two-month-long pilgrimage season.