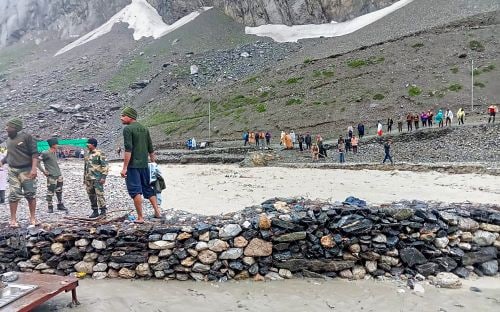 Amarnath: Rescue operation after a cloudburst that hit near the base camp of the holy cave shrine of Amarnath in south Kashmir Himalayas on Friday, July 8, 2022 | Photo: PTI

New Delhi: The India Meteorological Department on Friday said that the deaths and destruction near the Amarnath cave shrine in south Kashmir was due to a highly localised rain event.

According to weather scientists, the shrine reported 31 mm of rainfall between 4.30 pm and 6.30 pm on Friday. At least 13 people were killed and tents and community kitchens near the shrine were swamped with mud and rocks that came hurtling down with a gush of water after a spell of rain.

"It was a highly localised cloud only over the holy cave. Such rain had happened earlier this year as well. No flash flood," said Sonam Lotus, Director of the Regional Meteorological Centre in Srinagar.

The region above the Amarnath cave shrine received 28 mm of rainfall between 5.30 pm and 6.30 pm, a scientist from the IMD said.

Lotus said there was a possibility of a severe rainfall event in the higher reaches of the mountain near the cave shrine of Amarnath.