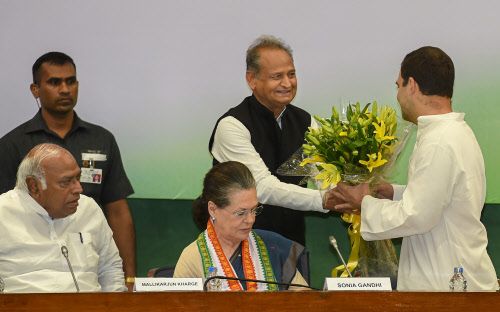 New Delhi: All eyes are on Congress chief Sonia Gandhi as top leaders converged at her 10, Janpath residence here on Monday after a series of developments in the last 24 hours in Rajasthan, where a majority of the party MLAs have rebelled against Sachin Pilot and want Ashok Gehlot to continue as the chief minister.

Party observers Mallikarjun Kharge and Ajay Maken, who were sent to Rajasthan, returned to Delhi on Monday after a planned meeting of the Congress Legislature Party (CLP) failed to take place. They met Gandhi at her residence soon after their return from Jaipur.

The high drama has also put a question mark on whether Gehlot would still run for the party president's post or someone else would replace him as a candidate supported by the current leadership. Gehlot has maintained that the "one man, one post" formula does not apply to him as the Congress presidential poll is an internal affair.

Maken said they would submit their report to Gandhi after which the party's further strategy would be chalked out.

He said he and Kharge kept waiting for the party MLAs in Jaipur on Sunday night but they did not turn up.

"We are returning to New Delhi to apprise Sonia Gandhi of the developments," Maken said.

Senior party leader and former Madhya Pradesh chief minister Kamal Nath is also expected to reach New Delhi to meet Gandhi. Nath, who is the Madhya Pradesh Congress chief, is known to have close ties with Gehlot and could be asked to broker a truce.

AICC general secretary, organisation K C Venugopal arrived at Gandhi's residence to discuss the situation arising in Rajasthan after a virtual revolt by a majority of the party MLAs. Former leader of opposition in Rajasthan Rameswar Dudy also met Gandhi amid the developments.

The political drama in Rajasthan over a possible leadership change continued on Monday with the MLAs loyal to Gehlot refraining from separately meeting Kharge and Maken. They held a parallel meeting in favour of Gehlot remaining as the chief minister and put forth a series of demands.

Pilot, who is seen to be the main contender for the chief minister's post if Gehlot is elected as the Congress president, is also expected to meet the party high-command amid the developments.

Congress sources said 82 MLAs loyal to Gehlot, who resigned on Sunday over a possible move to appoint Pilot as the next chief minister, are likely to hold a meeting on Monday to decide their next course of action.

The Congress has 108 MLAs in the 200-member Rajasthan Assembly.

Kharge and Maken, who waited in vain for all the MLAs to arrive for the CLP meeting on Sunday, were trying to persuade the Gehlot loyalists to meet them one by one, in an effort to defuse the political crisis.

However, several MLAs have left for their respective constituencies in view of the Navratri festival, the sources said.

Maken slammed the Gehlot loyalists for setting conditions for a party resolution, terming it a "conflict of interest", and said their decision to hold a parallel meeting amounted to indiscipline.

"In the 75 years of the Congress's history, there has never been a conditional resolution. A resolution is only a one-line document. Everything is told to the Congress president and then a decision is taken," Maken told reporters in Jaipur.

Rajasthan ministers Shanti Dhariwal, Mahesh Joshi and Pratap Singh Khachariyawas met Kharge and Maken at the chief minister's residence in Jaipur on Sunday night to convey the message of the Gehlot loyalists to them.

Maken said the delegation put forward three conditions -- a decision on the selection of the chief minister should be taken after the Congress presidential poll, the chief minister should be from among those MLAs who stood with the government during the political crisis in 2020 and not from the Pilot camp, and the AICC observers should hold meetings in groups, instead of one-on-one as sought by the high-command.

"We will listen to everyone. No decision is being taken. Whatever you will say will be conveyed to Delhi.... We have directions to hold one-on-one meetings with the MLAs so that they speak frankly," Maken had told the legislators.

"If a decision is not taken keeping the MLAs' sentiments in mind, the government will be in danger," Independent legislator and advisor to the chief minister Sanyam Lodha had said.

The Gehlot loyalists said they have told Kharge and Maken that any decision on the next chief minister should be taken after the party's presidential election on October 19 and in consultation with Gehlot.

They also want someone to the top post who stood with the Congress government during a political crisis in Rajasthan in 2020.

The aborted CLP meeting was seen as a crucial step ahead of Gehlot filing his nomination for the Congress president's post, amid speculation that former deputy chief minister Pilot will take his place in the state.

Gehlot and Pilot were at loggerheads over the chief minister's post soon after the Congress won the 2018 Rajasthan Assembly polls.

In July 2020, Pilot, along with 18 party MLAs, had rebelled against Gehlot's leadership.