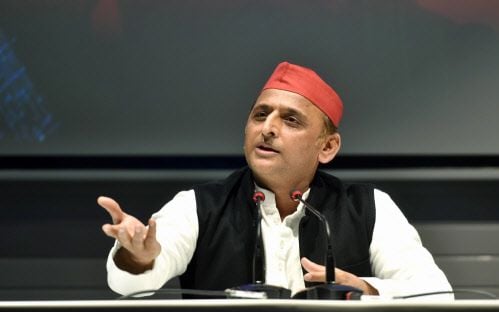 New Delhi: Reacting to Samajwadi Party (SP) chief Akhilesh Yadav's allegation, the Delhi airport official on Friday said that his helicopter for Muzaffarnagar was delayed due to high air traffic.

"Akhilesh Yadav's chopper was not granted permission by Air Traffic Control (ATC) to fly initially because of high air traffic. After the clearance was given, the chopper had less fuel. After refuelling, the chopper flew to the destined place," said a Delhi airport official.

Akhilesh Yadav alleged that his helicopter was stopped at Delhi airport without any reason. Akhilesh Yadav reached Delhi by commercial flight from Lucknow and had to travel by helicopter to attend a joint press conference with Rashtriya Lok Dal (RLD) chief Jayant Choudhary on his way to Muzaffarnagar from Delhi.

The SP chief alleged that his chopper was not allowed to fly from Delhi to Muzaffarnagar as the ruling Bharatiya Janata Party (BJP) was "disappointed". Akhilesh also claimed that a BJP leader was allowed to take off from the same airport while he was stopped.

Taking to Twitter, Yadav said, "My helicopter is still detained in Delhi without assigning any reason and is not being allowed to go to Muzaffarnagar. While a top BJP leader has just flown from here. This is a desperate conspiracy of the losing BJP. People are understanding everything...."

Ahead of the Uttar Pradesh Assembly elections, a joint press conference of Akhilesh Yadav and Jayant Chaudhary was called in Muzaffarnagar.