Entire nation's eyes on us: Tata Sons chairman to AI employees after takeover

The Union government officially handed over Air India to the Tata Group on Thursday after nearly 69 years. 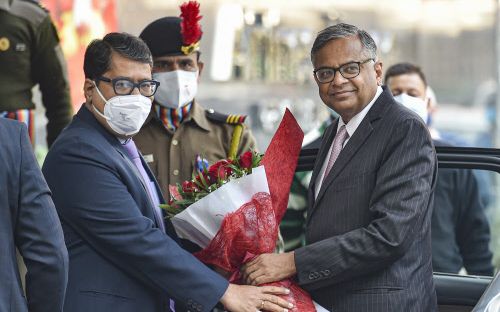 New Delhi: The entire nation's eyes are on the Tata Group and Air India waiting to see what they will achieve together, Tata Sons Chairman Natarajan Chandrasekaran told the carrier's employees in his first communique after taking over the airline on Thursday.

He expressed confidence that the golden age of Air India lies ahead. The Union government officially handed over Air India to the Tata Group on Thursday after nearly 69 years.

Following a competitive bidding process, the government had on October 8 last year sold Air India to Talace Private Limited, a subsidiary of the Tata Group's holding company, for Rs 18,000 crore.

In the communique sent to Air India's employees, Chandrasekaran said, "I have learned that to preserve what is best about the past, requires constant change. It is by evolving, adapting and embracing the future that we best honour a glorious history."

"The entire nation's eyes are on us, waiting to see what we will achieve together," he noted, adding, "To build the airline our country needs, we need to look to the future."

Air India was started by the Tata Group in 1932. However, after the country got independence, the airline was nationalised in 1953 by the then prime minister Jawaharlal Nehru.

"From the day of the announcement (October 8, 2021), one word has been on everyone's lips: homecoming," Chandrasekaran noted.

"Today is the beginning of a new chapter... I write this letter on behalf of the Tata Group, to welcome you to our family," the Tata Sons chairman said. He said like many others, he enjoyed reflecting on stories from Air India's brilliant past.

"My first flight was with Air India in December 1986, and I will never forget how special it felt to be onboard, or the exhilaration as we soared into the sky." Such memories are wonderful but now is the time to look ahead, he noted and stated that he is convinced that the golden age of Air India lies ahead.

"Our journey towards it starts now. Welcome. And welcome back," Chandrasekaran wrote in the communique to the employees.