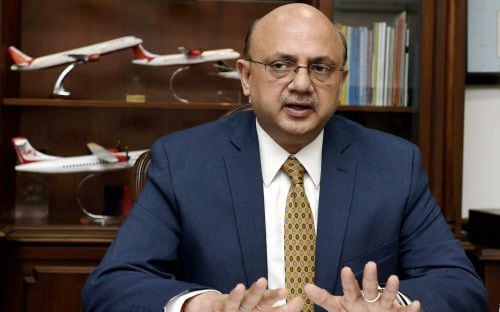 New Delhi: Air India Chairman Rajiv Bansal has been appointed as the new aviation secretary as part of a major top-level bureaucratic reshuffle effected by the Centre on Wednesday.

K Rajaraman, Additional Secretary in the Department of Economic Affairs, has been appointed as Secretary, Department of Telecommunications, a Personnel Ministry order said.

Rajaraman will take over the charge from Anshu Prakash who is due to superannuate on September 30.

Bansal, a 1988 batch lAS officer of Nagaland cadre, will replace Pradeep Singh Kharola, upon his retirement this month-end.

Steel Secretary Pradip Kumar Tripathi has been appointed as the Secretary, Department of Personnel and Training (DoPT), it said.

Govind Mohan, Additional Secretary in the Department of Home, will be Secretary, Ministry of Culture, the order said.

Anurag Jain, Vice Chairman of the Delhi Development Authority, has been appointed as the Secretary, Department for Promotion of Industry and Internal Trade, Ministry of Commerce and Industry.

Murthy, a 1989 batch IAS officer of Himachal Pradesh cadre, will take over the charge from Amit Khare, who retires on September 30.

Sunil Barthwal, who is currently Central Provident Fund Commissioner in the Employees Provident Fund Organisation, has been appointed as the Secretary, Ministry of Labour and Employment.

Anuradha Prasad, Special Secretary in the Ministry of Labour and Employment will be Secretary, Inter State Council Secretariat, Ministry of Home Affairs, the order said.

Rajesh Aggarwal, currently Additional Secretary and Financial Adviser in the Ministry of Petroleum and Natural Gas, will be Secretary, Ministry of Skill Development and Entrepreneurship, the order said.

Lok Ranjan and Sujata Chaturvedi, both working as additional secretaries in the DoPT, will be Secretary of Ministry of Development of North Eastern Region and Department of Sports respectively.

The Appointments Committee of the Cabinet (ACC) has also approved in-situ upgradation of nine officers to the level of Special Secretary in the rank and pay of Secretary to Government of India, the order said.

Katikithala Srinivas, Director, Lal Bahadur Shastri National Academy of Administration, has been given the rank and pay of Secretary to Government of India.

Arun Kumar, Director General in the Directorate General of Civil Aviation, has also been given the rank and pay of Secretary to Government of India, the order said.