One person died in Telangana's Secunderabad on Friday as protests against the newly announced military recruitment policy, Agnipath, turned violent. 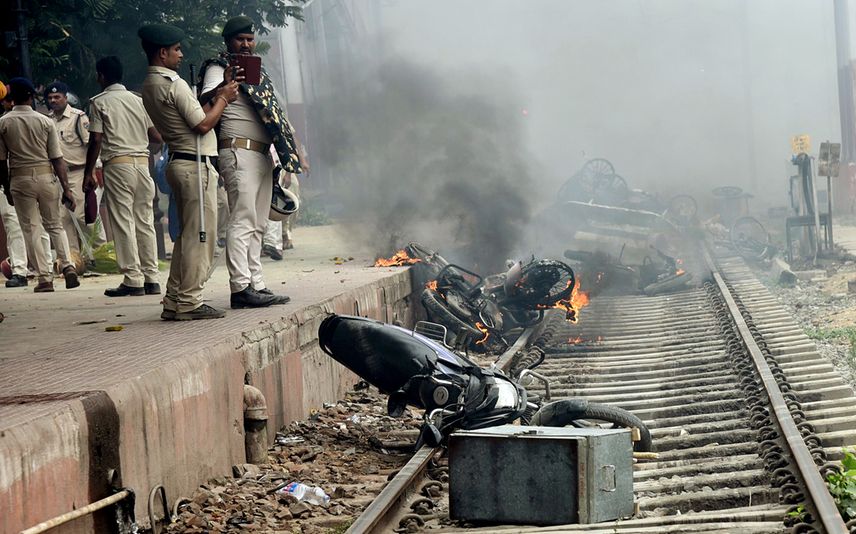 Properties of Danapur Railway Station are vandalised by the protesters during a demonstration against the Agnipath Recruitment Scheme | Photo: ANI

Hyderabad: Railway Police on Friday registered a case against protestors who set a train on fire and damaged railway property in Telangana's Secunderabad during a protest against the Centre's Agnipath scheme.

According to Anuradha, Secunderabad Railway SP, said, "Around 1500 to 3000 people protested. They held stone-pelting also in which some police personnel got injured."

The SP said it had not yet identified how many people were involved in the attacks, adding that property damage had not yet been assessed.

"We will take steps to ensure no disruption to train traffic. We will take the necessary steps to prevent such situations from happening again," she added.

One person died in Telangana's Secunderabad on Friday as protests against the newly announced military recruitment policy, Agnipath, turned violent.

Telangana Police resorted to aerial firing to disperse the angry crowd at the railway station.

In other parts of the country like Bihar, Uttar Pradesh and Haryana, protestors demonstrated for the third consecutive day.

At the Secunderabad Railway station, protestors vandalised the windows of a train and torched a two-wheeler on tracks and a few bags on the platform. The Railway has discontinued trains to the area.

Earlier, protesters torched compartments of a train in Samastipur and those in another train at Lakhisarai station.

Shashi Tharoor to start his campaign from Nagpur today, to visit Deekshabhoomi