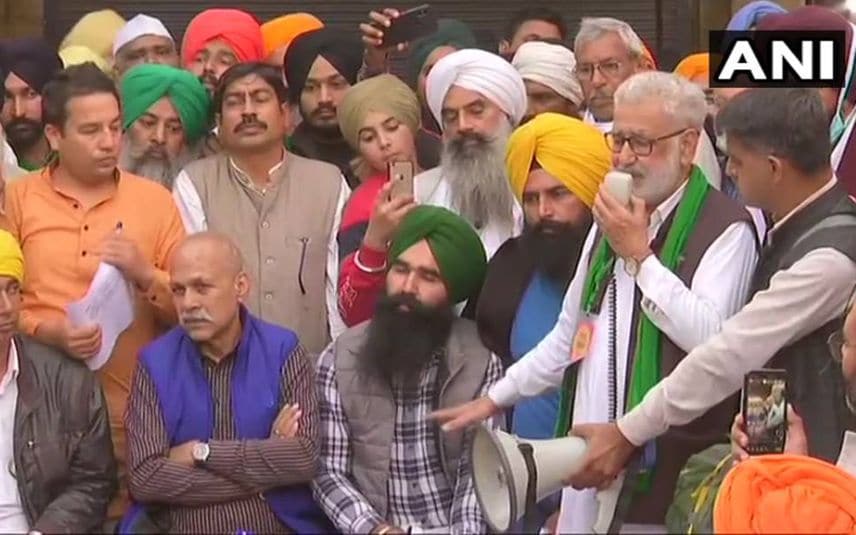 New Delhi: Protesting farmers on Wednesday unanimously rejected the proposed amendments suggested by the Central government to three controversial farm laws and have sought complete rollback of the laws.

This came after the government agreed to farmers' demands by giving its nod on key issues raised by them, including amendments to the three contentious farms laws that were the first and biggest issue driving the ongoing farmers' protest.

The government communicated its stand through a written draft proposal to the farmers in which it agreed to two main amendments regarding the minimum support price (MSP) and the Agricultural Produce Market Committee (APMC), but rejected their demand to repeal the three farm laws.

"We have rejected the proposal given by the Central government. There was no opposition from anyone. Our future course of action is that we will close all the borders in 1-2 days," said Kulwant Singh Sandhu, one of the farmer leaders.

The farmer union leaders said that there will be sit-ins at BJP offices and protest demonstrations will be held in many parts of the country on December 14.

"We will gherao dist headquarters in states on December 14 and the Jaipur - Delhi highway will be blocked till December 12. We will block all roads in Delhi one by one if the three farm laws are not scrapped," said farmer leader Shiv Kumar Kakka.

Farmer leader Darshan Pal urged the public not to pay tax on December 12 at any toll plaza in country.

In the proposal, the Centre agreed to a written minimum support price (MSP) assurance and uniform tax for private market yard and APMC -- a marketing board established by state governments to ensure that farmers are safeguarded from exploitation by large retailers, as well as ensuring that farm to retail price does not touch excessively high levels.

According to the proposal, there would be a provision for registration for private traders dealing in trade. On the issue of scrapping the farm laws, the government said it is ready to consider the provisions of the laws on which the farmers have raised objections.

On the issue of registration of traders, the government had given assurance to frame new rules under which state governments will be given the power to come up with new rules for the welfare of the farmers.

Clearing the apprehension among the farmers that their fields will be attached, the government had also ensured not to take any such action. The government's proposal clarified that the provisions in the new laws are very clear and it will release them and publicise them in a clearer manner if there is any confusion on the issue.

On the issue that big industrialists will take over farmers' lands and the farmers will be landless, the government's proposal said that it is already clear in the new law that neither can any loan be availed by the buyer on the structure to be built on the farmer's land nor such structure can be held hostage by him.

On the issue that there is no system of registration on agricultural contracts, the government said if the trader is not registered, he has to file a copy within 30 days regarding the deal with the farmers.

The government also said that those approaching the civil courts would now be allowed. Earlier, farmers had sought a rollback of this law.

On the Electricity Amendment Act 2020, the government has assured that the Act would not be implemented and the earlier process would be maintained as status quo.

On the farmers' demand to take back the law on stubble burning, the government said it will come up with a proper arrangement on the subject.

The proposal was sent to the farmers after their meeting with Union Home Minister Amit Shah on Tuesday night remained inconclusive. Five rounds of government-farmer talks have been held so far but they have been inconclusive due to both sides' staying adamant on their issues.

(With inputs from IANS, PTI)

New Delhi: The Supreme Court on Thursday said it would hear arguments on May 10 on the legal question of whether the pleas challenging the colonial-era ..

Mehsana: A magisterial court here on Thursday convicted Gujarat independent MLA Jignesh Mevani and nine others in a five-year-old case of holding an 'Azadi ..

Patna: Celebrated election strategist Prashant Kishor on Thursday announced that he has had his fill as a backroom operator for leading political players ..