After drama over detention while going to Hathras, Rahul, Priyanka released

UP police Personnel said that Rahul and his sister have been taken into custody as they were marching in an area where section 144 has been imposed. 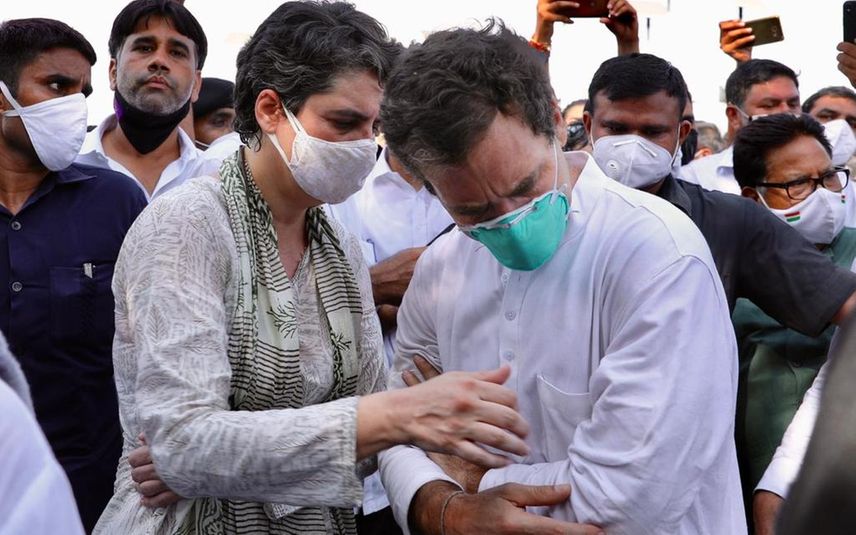 Greater Noida: High drama prevailed on Thursday after Uttar Pradesh police personnel pushed former Congress President Rahul Gandhi to the ground near the Yamuna Expressway and detained him along with his sister and party General Secretary Priyanka Gandhi Vadra, while they were walking towards Hathras to meet the family of the deceased gangrape victim.

However, they were soon released and sent back to Delhi by the Uttar Pradesh Police. Rahul Gandhi, along with his sister Priyanka and other senior leaders had left Delhi on Thursday to meet the family of the Hathras gangrape victim. However, they began marching towards Hathras after their vehicle was stopped near the Yamuna Expressway.

Later Rahul Gandhi told the media, "Just now police pushed me, lathi-charged me and threw me to the ground. I want to ask, can only (Narendra) Modiji walk in this country? Can't a normal person walk? Our vehicle was stopped, so we started walking."

Rahul said that even if Section 144 had been imposed, he will walk alone towards Hathras to meet the family of the rape victim. Attacking the Yogi Adityanath government in Uttar Pradesh over the detoriating law and order situation, in a tweet, Rahul Gandhi said, "In times of sorrow, loved ones are not left alone. In the 'jungle raj' of Uttar Pradesh someone's wish to meet a grieving family also scares the government. Do not be afraid so much, Chief Minister!"

Meanwhile, Ranvijay Singh, Additional DCP, Gautam Budh Nagar, told IANS that Rahul and Priyanka Gandhi have been detained. Singh further said that Rahul and Priyanka won't be allowed to proceed further as the police have a letter from DM Hathras saying that if they visit the village, it may disturb the law and order situation in the district. Also, there is the issue of providing security cover to them.

UP police Personnel said that Rahul and his sister have been taken into custody as they were marching in an area where section 144 has been imposed. The section relates to assembly of not more than five people at one place. The police officials said that Rahul and Priyanka Gandhi along with over a dozen people have been detained and brought to the JP Buddha Circuit guest House. They will be served notice under Section 41 for flouting Section 144 and they can be charged under section 188 of Covid-19 Pandemic Act, the police officials said.

In a tweet, Priyanka Gandhi said, "They prevented us from going to Hathras. When we all went out on foot with Rahulji, we were repeatedly stopped, they used lathis in a barbaric manner. Many workers have been injured. But our intention is clear. The sticks of an arrogant government cannot stop us. I wish the police would have used the same lathis in defensce of Hathras' Dalit daughter."

Rahul, along with Priyanka, Randeep Singh Surjewala, Rajiv Shukla and several other top party leaders was walking towards Hathras to meet the family of the victims a day after the last rites of the rape victim were allegedly performed by the police during the night in the absence of her family members. Congress leaders condemned the manhandling of Rahul Gandhi and Priyanka Gandhi by the UP police.

Senior Congress leader Ghulam Nabi Azad in a tweet said, "I strongly condemn the manhandling of Rahul Gandhi and Priyanka Gandhi by UP police. This act is totally unacceptable."

Congress General Secretary K.C. Venugopal in a tweet also condemned the UP police action and appealed to party workers to protest against the detention of the party leaders. "The cowardly UP government has arrested Rahul Gandhi and Priyanka Gandhi for seeking justice and trying to meet the Hathras victim's family. I appeal to all PCCs and Congress workers to protest today against the arrest of Rahulji, Priyankaji and other party leaders," Venugopal said in a tweet.

Congress national media incharge Surjewala, who was also travelling with Rahul, in a series of tweets said, "Even during the British Rule, (Mahatma) Gandhiji could undertake the Dandi March for salt satyagraha. Shameless that in independent India in a democratic setup, the same cannot be done. UP Police lathi charging and arresting Rahul Gandhi sums it up!"

"The Adityanath government has arrested hundreds of Congress workers and leaders at Surajpur Police Line, Noida. The voice of the poor family is being suppressed in Hathras and that of every person raising their voice on the UP border. The struggle will continue," he said in another tweet.

The Congress leader also slammed the Yogi Adityanath government saying, "Ajay Bisht, the pot of sins of your misrule is full. Pictures of police brutality with Rahul Gandhi, Priyankaji and Congressmen going towards Hathras peacefully to console the family of the deceased victim are the beginning of the BJP's downfall in the country and UP. Keep this thing in writing."