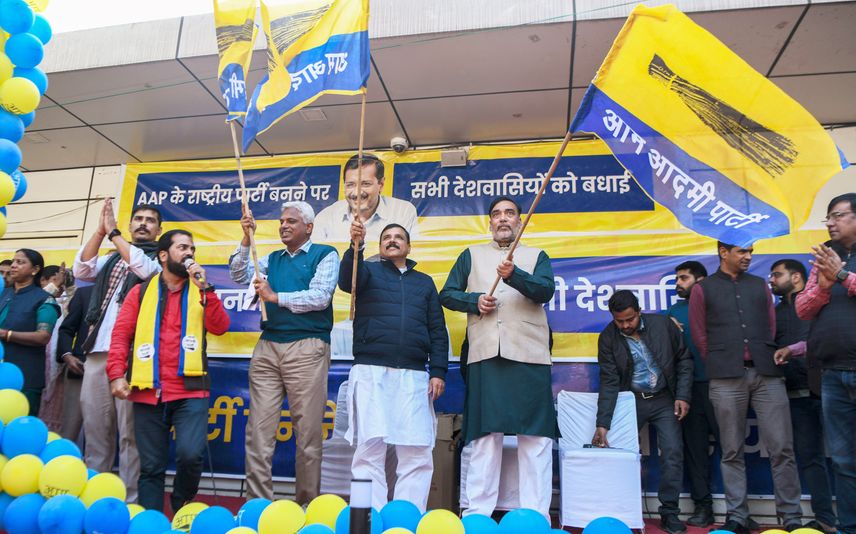 Ahmedabad: The Aam Aadmi Party won five seats and secured 13 per cent of the popular vote in Gujarat, in a performance that belied its high-decibel campaign in the state but cleared the way for it to become a national party.

During the campaign, the party positioned itself and its national convenor Kejriwal as the sole challenger of the BJP and Prime Minister Narendra Modi respectively. Vote counting on Thursday, however, showed that the party succeeded more in splitting opposition votes and helping the BJP score a historic win.

It also failed to replace the Congress party as the principal opposition in the state.

Despite the AAP cutting into its votes, the Congress still polled 27 per cent votes and won 17 seats. In several constituencies, especially in the Saurashtra region, the AAP seriously hurt the Congress party's prospects as the contest turned three-cornered with BJP succeeding to keep its core voters intact.

AAP's Gujarat chief Gopal Italia, however, described his party's performance as “an impressive entry into BJP's Gujarat bastion” and said it was a victory of Kejriwal's "honest politics.”

Italia himself failed to win from Katargam in Surat, the diamond and textile hub that the AAP had sought to use as a launchpad for its Gujarat foray. He lost to BJP's Vinod Moradiya by more than 64,000 votes. The AAP's CM face in Gujarat, Isudan Gadhvi, lost by more than 18,000 votes in Khambhalia, a high-profile constituency in the Saurashtra region.

That said, the AAP did achieve an important feat. The party, now classified as a state party, needed to win at least two seats and 6 per cent of the votes polled in the Gujarat assembly election to earn the status of a national party. It secured much more than that.

A national party tag will still be a boost for the AAP's national ambition even though it failed to make a big splash in Gujarat.

More so, it comes on the back of a spectacular win in the civic body elections in Delhi, where the AAP unseated BJP, winning 134 of the 250 wards of the Municipal Corporation of Delhi that went to polls on December 4. The BJP, which had controlled the MCD for 15 long years, could win only 104 wards.

Riding high on its stupendous victory in Punjab Assembly polls earlier this year, the Kejriwal-led party launched its foray into BJP-ruled Gujarat and Himachal Pradesh as part of its national expansion plan. It had a rather poor showing in Himachal, where it could poll just about 1 percent of votes and failed to win any seat.

Although the AAP fielded its candidates for all Assembly seats in Gujarat and Himachal Pradesh, it kept its prime focus on PM Modi's home state where it has been able to build a few strongholds in recent years.

The party gained ground in the BJP-ruled Gujarat after it won 27 seats in the 2021 Surat Municipal Corporation elections. The Congress, which had 36 councillors, lost all the seats in the civic body election.

Seeking to expand its footprint, the AAP plans to contest in most of the states going to polls next year. That includes Congress-ruled Chhattisgarh and Rajasthan and BJP-ruled Madhya Pradesh and Karnataka. The party also plans contest elections in Jammu and Kashmir, likely to be held early next year.