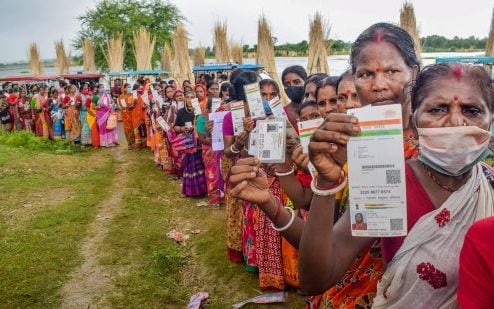 New Delhi: Aadhaar has thrown Ghost beneficiaries out of the system. This has led to savings of Rs.2.25 lakh crore to the exchequer, Saurabh Garg, Chief Executive Officer of Unique Identification Authority of India (UIDAI) said in an interview with ANI.

"If we add schemes of state governments then this figure will go up further," he said.

Aadhaar has made the implementation of government schemes much easier. During COVID-19, the Government has transferred money to the beneficiaries with the help of Aadhaar. People were able to withdraw cash with micro ATMs in their neighbourhood shops without going to banks during the lockdown. This is the ease of living that Aadhaar has brought into the lives of common man, he added.

We allotted the first Aadhaar number on 29 September 2010. We had just touched the milestone of a decade. Now we can say that Aadhaar enrolment has come to a saturation point. Now we have set a goal for what should be done in the next 10 years. How can we offer more for ease of living? We had just concluded Aadhaar 2.0 Conclave where we invited ideas.

Garg said UIDAI would focus on three-four things in the coming years. "Our first priority is resident focus. We want to provide more facilities to people. People can update their records sitting at home on their computers. 1.5 lakh postmen will go village-to-village for updation and enrolment in Aadhaar. We are opening 50,000 Aadhaar centres to cover 6.5 lakh villages of the country. We are designing App so that a smartphone user can update their Aadhaar records and even can do transactions. Our focus is also to link Aadhaar with PAN, mobile SIM cards, ration cards, and bank accounts, etc."

Garg said that Aadhaar is a programme of technology. "We want to use new technologies like Artificial Intelligence, Blockchain and machine learning to strengthen Aadhaar and to make it more secure and the last thing I want to focus on is information security and privacy. Aadhaar architecture is designed keeping privacy in mind," he added. (ANI)

Last date to link PF account with Aadhaar is Aug 31

EPF members in trouble as linking UAN with Aadhaar not completed

Higher TDS if PAN not linked with Aadhaar by March 31

New Delhi: To counter the electricity crisis in the country, the Railways has deployed 86 per cent of its open wagons to transport coal to various power ..

Lalitpur (UP): A 13-year-old girl who was allegedly raped by four men over three days was sexually assaulted again by the SHO of a police station where ..

New Delhi:The Supreme Court on Wednesday did not agree with the Centre's submission that court should wait for the President to take a call on the mercy ..