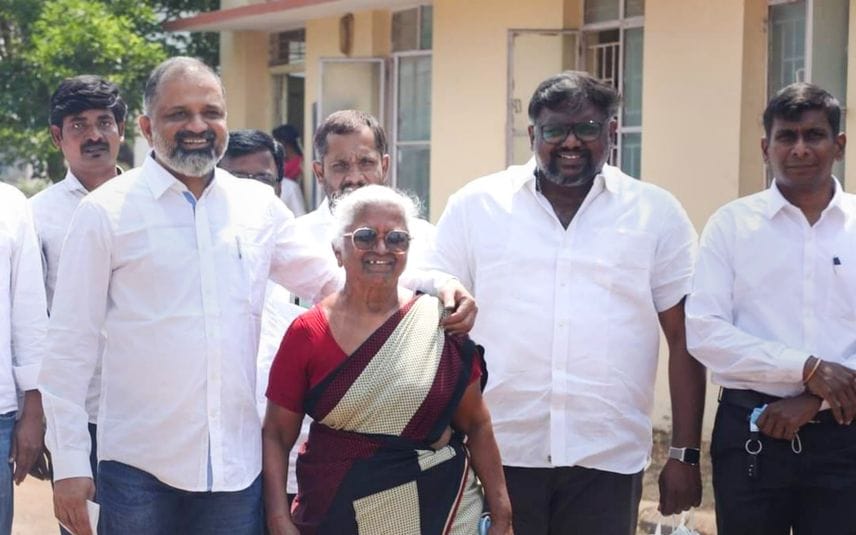 Perarivalan with his mother. Photo:PTI

Chennai:True to her name, Aruputhammal, the 74-year old mother of A G Perarivalan relentlessly pursued a painstaking legal battle for decades to get her son released.

The word 'Aruptham' in Tamil means miracle and Ammal is a honorific to denote an elderly woman, a mother usually.

Perarivalan, speaking to reporters here credited his mother for her sacrifices and her non-stop efforts that has eventually led to his release through the Supreme Court's judgment.

"She has faced insults, she was ignored and she suffered agony. Despite all that she was persistent and fought for me without a break for 30 long years," he said.

"For both of us, me and my mother it is the truth and justice on our side which gave us the strength to fight," he said.

Arputhammal profusely thanked everyone right from the state government to a whole lot of sympathisers for their support in getting her son released.

The septuagenarian woman in her fight has visited almost all key political leaders and she was prompted to go from pillar to post in her legal mission to secure her son's release. She was the driving force behind petitions filed on behalf of her jailed son.

On her son's behalf she has consulted a battery of lawyers here and in Delhi as well, taking an arduous journey from her Jolarpettai residence in Tirupathur District, about 215 km from here.

While meeting Palaniswami, who was then the Chief Minister, she had requested him to honour the promise made to her by Jayalalithaa that her son would be released from prison.

Palaniswami too assured to fulfill the promise made by his leader and in 2018 a Cabinet decision was taken and a recommendation was made to the then Governor Banwarilal Purohit to release all the 7 Rajiv case convicts.

A few years ago, out of frustration she had said that she was prepared to write to the central and state governments to seek mercy killing of her son to end his misery as he was battling several ailments due to his incarceration for nearly 3 decades.

Now, all the pains she took to get her son released has fructified, Perarivalan and his supporters say.

In August 2017, he got parole for the first time after his arrest in June 1991. Subsequently, he got similar reliefs and was granted bail recently by the Supreme Court.

Perarivalan, heaving a sigh of relief over his new found freedom said he would like to lead just a normal life. Rajiv Gandhi was assassinated on May 21, 1991 at Sriperumbudur near here by a woman suicide bomber Dhanu. PTI