Farmland with standing crops, as well as ponds and wetlands in the adjoining villages have also been badly affected and the threat is growing with every passing day. 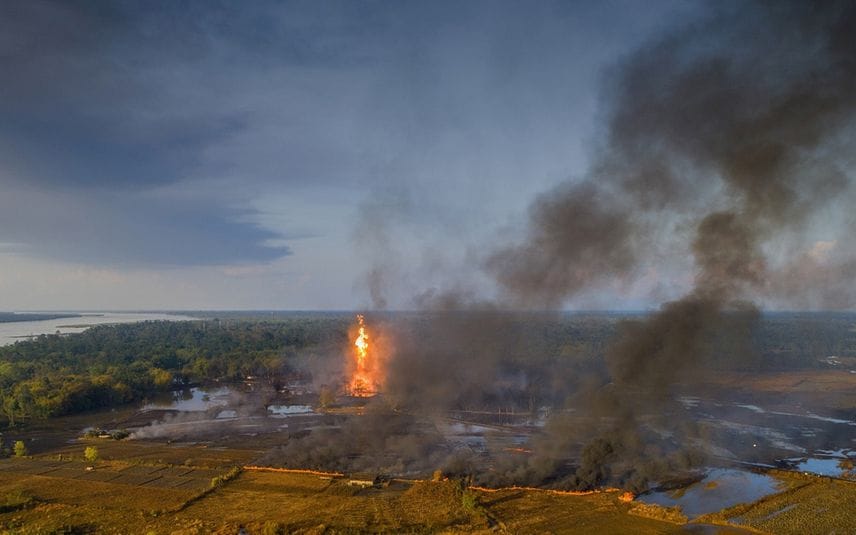 An aerial view of the Baghjan oil field engulfed in fire, in Tisukia, Assam, Tuesday, June 9, 2020. The field has been leaking gas for the past two weeks. (PTI Photo)

Guwahati: At least two firefighters of Oil India Limited (OIL) were killed near the oil well blowout site in Assam's Tinsukia district on Wednesday. Many houses in the adjoining areas were also damaged and several thousand people have shifted to safer places and the relief camps set up by the OIL.

Officials of the Tinsukia district administration said that firefighters Durlav Gogoi and Tikheswar Gohain had been missing ever since a massive fire broke out at OIL's oil well on Tuesday afternoon."The cause of deaths of the firefighters could be drowning in a nearby pond or suffocation in the huge smoke coming out from the massive fire since Tuesday afternoon," the officials told the media.

The National Disaster Response Force (NDRF) personnel recovered the bodies with the help of drones used by the Forest Department of the Assam government. According to the district administration officials, another firefighter of the ONGC (Oil and Natural Gas Corporation) was injured at the site on Tuesday and taken to Assam Medical College and Hospital in Dibrugarh. His condition was stated to be out of danger.

An OIL spokesman said that the fire has been controlled in a 1.5-km radius but it is still raging as the "uncontrollable" natural gas is being fed by the well's oil. Local people said that the inferno has left a trail of devastation in the adjoining areas, including a famous lake. Experts, environmentalists and wildlife activists are worried as the Dibru-Saikhowa National Park, known for its feral horses, is less than two km away.

Central paramilitary troopers, NDRF, OIL and ONGC engineers and experts are on a war-footing exercise to douse the fire. The oil well at Baghjan in Tinsukia, around 550 kms east of Guwahati, has been leaking gas for the past 15 days, causing enormous damage to the region's wildlife, wetlands and biodiversity.

The massive fire broke out at the leaking natural gas producing well of the state-owned OIL in Tinsukia district on Tuesday even as an expert team from a Singapore-based emergency management firm was trying to plug the leakage, prompting the state government to seek the Indian Air Force's help to douse the blaze.

Farmland with standing crops, as well as ponds and wetlands in the adjoining villages have also been badly affected and the threat is growing with every passing day.

The OIL spokesman said that after preliminary discussions and debriefing session, the experts from Singapore's 'Alert Disaster Control', led by Michael Ernest Allcorn, along with the OIL team, reached Baghjan well site on Monday afternoon.