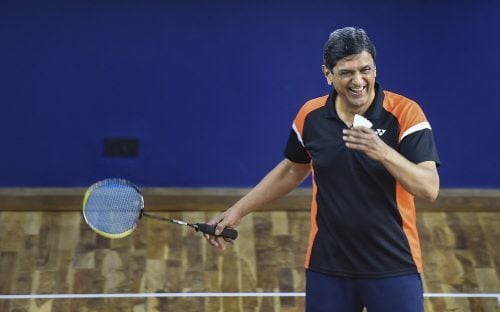 A year that had started on an uncertain note what with the pandemic at its height is almost ending but after bringing cheer to Indian sports, thanks to badminton and in particular to the heroics of Kidambi Srikanth, who became the first Indian male player to reach the final of a world championship. True a title-win, which did not seem beyond his reach, considering his higher ranking and steely resolve that he had displayed till then, would have given a golden hue to the settings but that does not matter. The feeling that Indian badminton has come up this much in itself is a kind of inspiration for sports in general in India.

None would have thought about this welcome transformation at the start of the year when confusion could best describe the sports settings in general in the country. Leave aside cricket which dared to have its events held under tight regulations upto a while but for others and for those who had been working hard for that one big quadrennial programme, the Olympics it seemed just despair. The already postponed Tokyo 2020 had hung in balance with the Japanese capital itself in the grip of the virus. But the Games were held in what was a gigantic show of grit and determination by the Japanese and IOC officials and we know how it unraveled a new face of Indian sports with a performance that was the best in four decades! Seven medals including that gold by Neeraj Chopra in javelin summed up that grand outing. Add to that landmark moments were the paralympic athletes who garnered eight medals including two gold for another best ever effort, only days later.

The dream run has continued obviously, thanks to the badminton heroes it must be said. At Tokyo itself it was seen with India's best ever bet till then, P.V. Sindhu getting a bronze and making history by becoming the first Indian woman to win medals in successive Olympics (she had won a silver in 2016 Rio ). A world champion thereafter in 2019 (after winning two silver and two bronze medals earlier), Sindhu was expected to go far in Tokyo but somehow the wonted touch of hers was missed but nonetheless she did not return empty handed, enough to inspire her colleagues to work harder. At the latest championship in Huelva in Spain, it must be said the focus initially was on her. Can she defend her title successfully was the prayer on every Indian badminton lover's lips. But again slips proved decisive and for once a medal eluded her. The story did not end there though as we saw, thanks to Srikanth and another sparkling talent Lakshya Sen. The two continued from where Sindhu left and what is more played each other in the semi-final to ensure two medals straightaway, another first in Indian badminton!

Indeed if it was ace shooter Abhinav Bindra whose gold medal effort in the 2008 Beijing Olympics that gave a spurt to the sport of shooting in the country, though Tokyo Games for once did not endorse that sparkle, mention has to be made of Sindhu and Saina Nehwal for the highs seen in badminton. Saina, the 2012 London Olympics bronze medallist, was once the cynosure of all eyes with her winning touch in tournaments. Then Sindhu moved in but looking at the history of Indian badminton in recent times perhaps one needs to go back to the days of Prakash Padukone first to understand the impact of performances on the growth of the sport. Loaded with dreams of becoming one of the best, this Bangalore stalwart decided to go to Europe, to Denmark specifically and struggle to earn perfection. By 1980 he had become the World's best and the sport needed no better impetus than this man's achievements. As one who had an opportunity to report on his matches in India in the early eighties, I still remember the excitement he created playing in a Masters event in Hyderabad in 1982. He lost to a young and upcoming Indonesian Icuk Sugiarto (later to become a legend) in the final but showed why he was held in such high esteem in world badminton. The young Sugiarto could not hold back his tears, saying “I can't believe I beat Prakash!!”

From a player then to the man behind the Padukone academy in Bangalore can be one short step in his career but it has proved a giant step for Indian badminton. The latest proof is Lakshya who just emulated his guru by winning the bronze in the Worlds! As a talented youngster he had come to the academy where former national champion Vimal and co, along with Prakash moulded this Almora-born lad to now become the most exciting prospect for India. Surely there is much more that one would hear of Lakshya in the days ahead. If Prakash is giving back to the sport that made him what he is, not a step behind it must be said, is P. Gopichand, another classic player of recent past and one who has also proved a master talent builder based in Hyderabad. The second Indian after Prakash to win the All England Championship, Gopi's commitment to the sport is just as deep as the Bangalore maestro. Just look at the array of players he had helped come up from his academy_ Saina, Sindhu, Srikant, Sai Praneeth, among others! As the chief national coach how proud he must be to see Srikanth emerge as the second best in the World.

Indeed badminton in India has shown how much the sport could benefit from the involvement of former champions. The story may not end here. With 2022 loaded with major sporting events like Asian Games and Commonwealth Games, badminton will be right there on the top in tems of expectations. For now let's savour the success thus far!