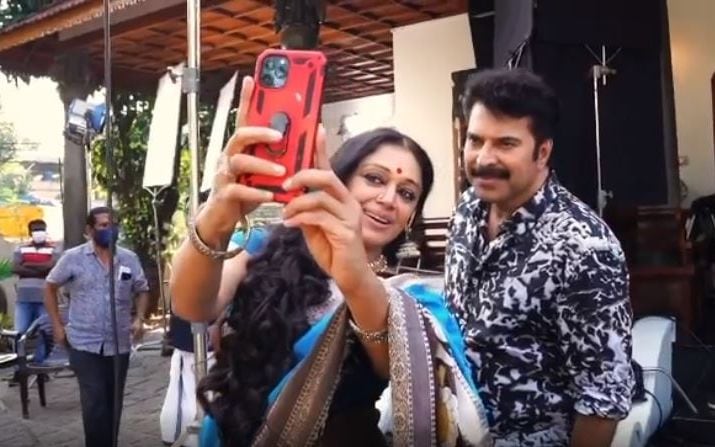 Mammootty and Shobana on the set of CBI-5-The Brain

Star duo Mammootty and Shobana have gifted the Malayali audience a bunch of great movies. The recent video shared by Mammootty on his Instagram handle shows that there has been no change in their friendship even though it’s been a long time since they shared screen space.

The video shows Shobana arriving at the set of 'CBI 5-The Brain' starring Mammootty. The video was captioned ‘When Nagavalli met Sethurama Iyer’. The movie team can be seen receiving the actress with much love and warmth.

Shobana dined with them and took several photos on the set. Meanwhile, selfie of Shobana and Mammotty clicked at set had gone viral on social media.

'CBI 5-The Brain' directed by K Madhu will feature Mammootty as Sethurama Iyer, a CBI officer. The movie is a sequel to his previous movies 'Oru CBI Diary Kurippu', 'Jagratha', 'Nerariyan CBI' and 'Sethurama Iyer CBI'

The story of this investigative thriller has been written by SN Swamy, who also wrote the stories of the other four Malayalam films in the franchise. The movie will mark Jagathy Sreekumar’s return to the movie.

Moving to the next stage of my personal life: Vignesh Shivan on marriage ...