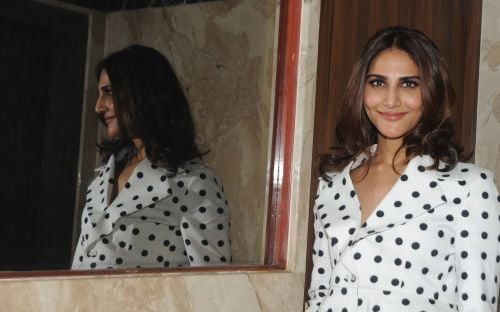 Mumbai : Actor Vaani Kapoor shared her excitement about the year that lies ahead as she rang in her 33rd birthday on Monday.

The Bollywood diva who has big entertainers like 'Shamshera' with Ranbir Kapoor and 'Chandigarh Kare Aashiqui' with Ayushmann Khurrana in her kitty shared that she is hopeful for these movies to position her 'correctly' as a performer in the film industry.

Vaani said, "I have an exciting year to look forward to actually! I have two big films Shamshera and Chandigarh Kare Aashiqui that are ready to release in theatres and I'm hoping they will entertain audiences thoroughly. These two films will also present me in completely different avatars and I can't wait to see the reaction from people for my performances."

The 'Befikre' actor shared that she has worked tremendously hard for 'Shamshera' and 'Chandigarh Kare Aashiqui' and is delighted about how they have shaped up.

"I have been choosy about the films that I select because I want to pick quality content over quantity and I'm proud of both Shamshera and Chandigarh Kare Aashiqui. They are films that will hopefully position me correctly as a performer who is looking to take the risks and push myself constantly to make a mark," the birthday girl shared.

Speaking about her upcoming movies: 'Shamshera' produced by Yash Raj Films, is said to be a dacoit drama set in the 19th century. It will chronicle the story of a dacoit tribe fighting for their right and independence from the British. Apart from Vaani, it will feature superstars Ranbir Kapoor and Sanjay Dutt.

On the other hand, 'Chandigarh Kare Aashiqui' is a modern-day love story, which has been produced by Bhushan Kumar's T-Series in collaboration with Pragya Kapoor's Guy In the Sky Pictures. This movie will mark the first-ever collaboration between Vaani and Ayushmann.

Actor Vijay, a reason for my son slowly coming back to life: veteran actor Nassar