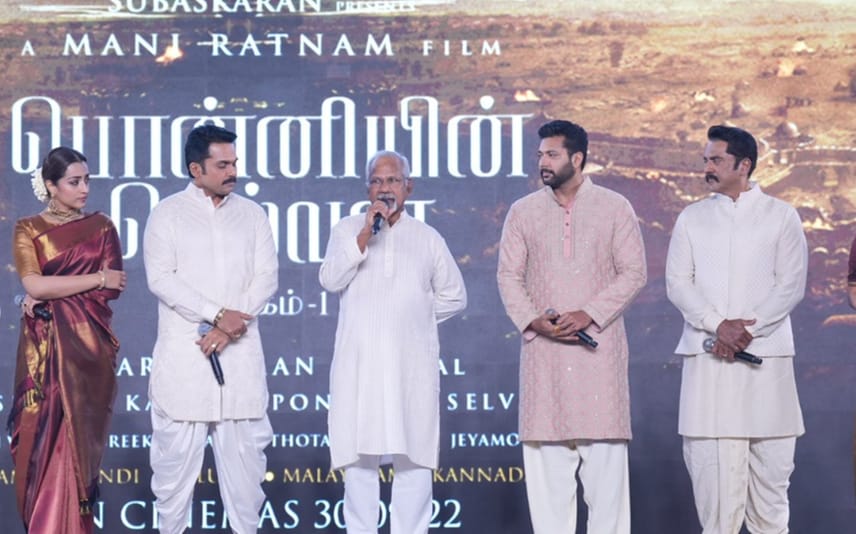 Mani Ratnam with 'Ponniyin Selvamn I' actors at the teaser launch of the movie. Photo: Twitter

Chennai: Stating that several people had tried to make eminent writer Kalki's epic novel 'Ponniyin Selvan' into a film, Mani Ratnam said he himself had tried thrice -- once in the 1980s, then in 2000 and for the third time in 2010, before finally succeeding now.

Speaking at the grand teaser launch event organised by the makers at the Chennai Trade Centre on Friday, Mani Ratnam said, "I first read this book when I was in college. Almost 40 years have passed. It's not left my heart until now. My first thanks go to Kalki.

"Makkal Thilagam M.G. Ramachandran should have acted in this film. After 'Nadodi Mannan', he was to act in this film. But somehow, that didn't happen. It is only today that I got to know why he was not able to act. He has left it for us to make.

"Several people have tried to make Kalki's epic novel 'Ponniyin Selvan' into a film. I myself have tried thrice -- once in 1980s, once in 2000 and once in 2010. Therefore, I know what a big responsibility this is.

"That is because it is loved by everybody who has read it. They are an authority on it. They own it, and they are very possessive about it. So, when I did this film, I said to myself. I am also like them. I own it, I am also possessive about it and I will do it the way I want to do it. This wouldn't have been possible without all my artistes and technicians."

Kamal Haasan to team up with Mani Ratnam after 35 years