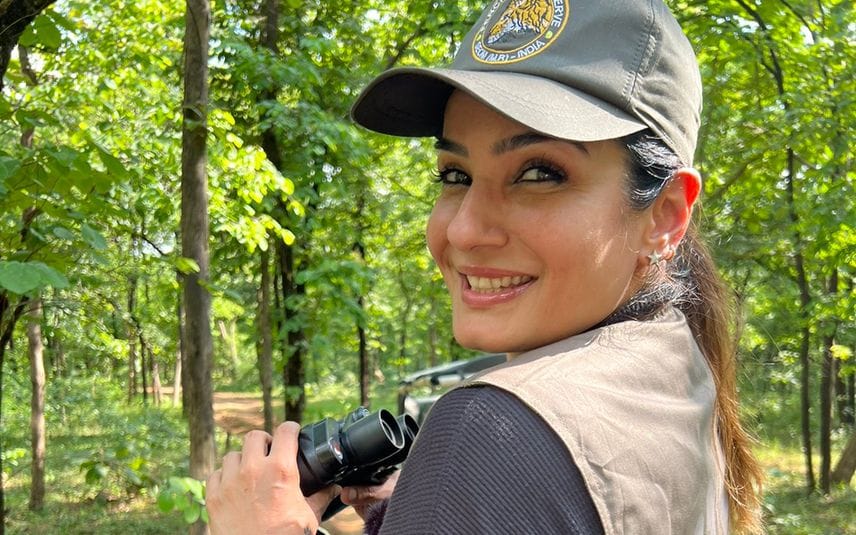 Mumbai (Maharashtra): After Raveena Tandon's safari video sparked a furore, the actor on Wednesday clarified that she did not flout any guidelines.

Tandon took to Twitter and said she was travelling inside Madhya Pradhesh's Satpura Reserve in a jeep licensed by the forest department and that the vehicle "didn't deviate from the designated tourism path."

"A tiger gets close to the deputy rangers bike. One can never predict when and how tigers will react. It's the Forest Department licensed vehicle, with their guides and drivers who are trained to know their boundaries and legalities," Raveena tweeted.

She also wrote, "#satpuratigerreserve .. Tigers are kings of where they roam. We are silent spectators. Any sudden movements can startle them as well."

Raveena visited the Satpura Tiger Reserve on November 22 and shared pictures and videos from the reserve on her social media. In one of her videos a tigress can be seen walking apparently quite close to the actor's jeep and growling before walking on.

The actor tweeted that she and her fellow passengers sat quietly and watched the tigress move on.

"Luckily for us, that we did not take any sudden action, but sat quiet and watched the tigress, move on. We were on the tourism path, which mostly these tigers cross. And Katy the tigress in this video as well, is habituated to coming close to vehicles and snarling," she added.

The official, however, clarified that if the guidelines of the Reserve are found to have been violated then action will be taken against the staff.

"Normally action is not taken against visitors (to the reserve) because we believe that the guides and the drivers who are trained every year before the tourist season on the dos and don'ts, and maneuvering the vehicle is their job," Chouhan said.

"We have asked them (Satpura Tiger Reserve authorities) for reports and we'll be able to reveal anything about the proceedings after we receive them. The rules and regulations aside, it is for the safety of visitors that they are advised to keep a safe distance from the tigers and not to obstruct their movements. We train our guides, drivers and naturalists every year before the tourist season starts, since the lives of visitors is at stake here. We do not wish any visitor to have any sort of threat to their life."

"I will just say that the movement of tigers must not be obstructed. Let them roam wherever they want to. It is visible that the animal was inconvenienced. However, I can only establish anything once the report comes to me. Proceedings will be initiated after it is determined if there was any violation of the rules," Chouhan said.

Guidelines for the Satpura Tiger Reserve, the biggest tiger reserve of Madhya Pradesh states that only safaris on vehicles on the designated routes is permitted in the Core Zone of the Tiger Reserve.

The guidelines also state that tourists will be bound to follow the instructions of the guide, forest staff during safaris.

It's confirmed! Raveena Tandon to feature in 'KGF: Chapter 2'