Kochi: Actress Archana Kavi expressed her displeasure against Kerala Police after facing an unsavoury episode at night in which a group of cops in Kochi allegedly intimidated her and those women accompanied her.

Archana Kavi took to her Instagram handle and revealed the ordeal faced by her, her friend Jessna and the latter’s family members. She shared the story updates with hashtags #keralapolice and #fortcochinpolice. 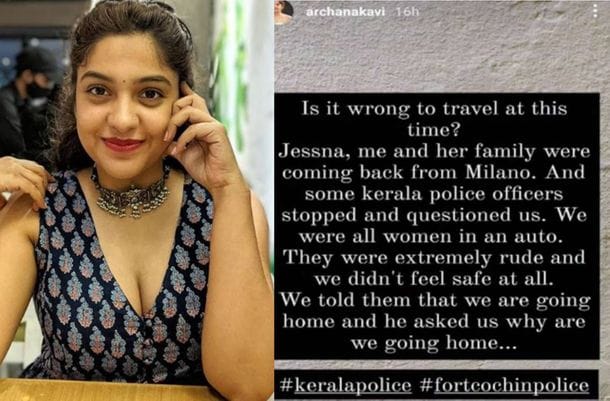 According to Archana Kavi, a group of police stopped and questioned her and the other women, while travelling in an autorickshaw. The cops reportedly asked where they are going. When the women informed that they are returning home, one among the cop reportedly mocked them with a question ‘Why are you going home?’.

The actor referred the behaviour of the cops as extremely rude and noted that their all women group did not feel safe.

“I don’t mind being questioned, but here is a way to do that. It was extremely disturbing. They want us to go them when we have a problem,” wrote Archana.