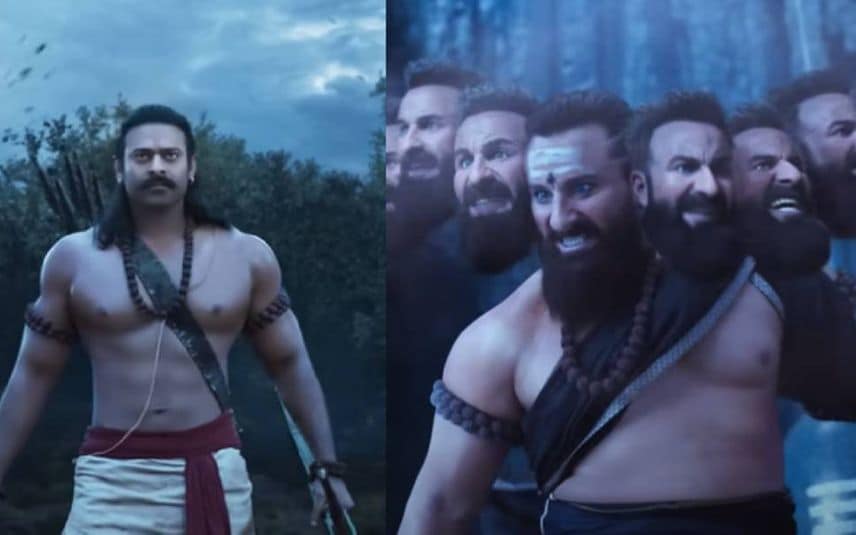 New Delhi: Four months from release and “Adipurush”, a big budget adaptation of the Ramayana, is already neck deep in controversy for multiple reasons - the depiction of Ravana and Hanuman and also its inferior visual effects.

The 1.46-minute teaser of the movie, directed by Om Raut of "Tanhaji: The Unsung Warrior" fame, was launched on Sunday in Ayodhya. And the blowback was immediate.

Fronted by "Baahubali" star Prabhas who features in the title role as Lord Ram, the multilingual period saga sees Saif Ali Khan play the role of a 10-headed demon king called Lankesh. With a beard, fierce eyes and a buzz cut, this Lankesh seems barbarism personified and many called out the filmmakers for the apparent Islamisation of Ravana.

The portrayal of Hanuman, with a beard, without a moustache and dressed in leather, also attracted criticism.

As hashtags like #BoycottAdipurush and #BanAdipurush gained speed, Madhya Pradesh Home Minister Narottam Mishra on Tuesday warned the makers of the film of legal action if scenes showing Hindu religious figures in the "wrong" way were not removed.

"I have seen the teaser of 'Adipurush'. There are objectionable scenes in it," Mishra, who is also the spokesperson of the state government, told reporters in Bhopal.

The dresses and look of Hindu deities as seen in the trailer were not acceptable, he said.

"Hanuman ji is shown wearing leather, whereas the description (in the scriptures) of the deity's costume is different… These are scenes that hurt religious sentiments. I am writing a letter to Om Raut to remove all such scenes from the film. If not removed, we will consider legal action," Mishra said.

Director Raut said he is "disheartened" by the reaction to the teaser.

"I was disheartened but not surprised because the film is made for a larger medium. You can cut it down to some extent, but can't bring it down to a mobile phone, that's an environment I can't control.

"If given a choice, I had never put it on YouTube but that's the need of the hour. We need to put it there so that it reaches a wide audience," Raut told reporters at the media preview of film's 3D trailer on Tuesday.

Producer Bhushan Kumar was unavailable for comment despite several attempts by PTI to reach out to him.

Many on social media said they were appalled over Saif's appearance as a maniacal Lankesh, saying his look was inspired by Mughal rulers. Some said it bore resemblance to Ranveer Singh's portrayal of Alauddin Khilji from Sanjay Leela Bhansali's film "Padmaavat", which came under attack for caricaturing Khilji, complete with kohl lined eyes and viciously attack a hunk of meat.

"The makers should have done more research on Ravana. Saif Ali Khan's expressions look absolutely pathetic. Ravana was not a psycho. Saif is acting like he is portraying khilji from padmavat. Mythological movies absolutely need better character understanding (sic)," said a Twitter user.

"He (Saif) is looking more like Babar or Aurangzeb or Taimur but certainly not Raavan," added another.

The VFX, said others, was a huge letdown for a film that reportedly has a budget of Rs 500 crore, making it one of the most expensive Indian films ever made.

A section of social media seemed both amused and disappointed (#disappointed was trending on Twitter) about the quality of its computer-generated imagery. Generally an expensive affair, CGI is used to create fantastical visual effects in films.

"Bruh this is Jaani Dushman levels of CGI. #AdipurushTeaser," said a Twitter post drawing comparison with the 2002 supernatural action thriller film which has attained cult status over the years as a cringe watch.

Sharing a still from Ramanand Sagar's epic serial "Ramayan", a tweeple said no big bucks or latest technology could ever level up to the "simplicity" of the classic 1980s Doordarshan show.

"No 500 crore budget, No 3d release, Just simplicity. Nothing can ever come close to this #BoycottAdipurush," a tweet read.

A specific scene from the teaser where Saif's Lankesh is seen mounted on a bat-like mythical creature with huge flapping wings prompted some people to draw comparisons with "Game of Thrones", the hit American fantasy TV drama famous for its dragons.

"Is it just me or do you also notice the pathetic copy of #GameOfThrones that #Adipurush is! The characters are definitely NOT of #Bharat...," said one post.

Another scene recalled for some the American blockbuster sci-fi film series "Planet of the Apes".

"Copy cat #OmRaut #Adipurush #DisappointingAdipurish," said a user as he put the clips of the promotional materials of the two films.

Many shared stills from "Ramayana: The Legend of Prince Rama", the 1993 animated film which was a Japan-India co-production. Directed by Japanese filmmaker Yugo Sako, it became a favourite of the 1990s generation kids who watched it several times on TV channels during re-runs.

"#Adipurush had the golden chance to present us a film on the subject which is dear to everyone but sadly even with the colossal budget and modern technology it couldn't match even 1% of yugo sako's Ramayana: The Legend of Prince Rama," wrote a Twitter user.

This is not the first time Saif has been in trouble for "Adipurush".

In an interview to a newspaper in 2020, Saif had said the version of Raavan in "Adipurush" will be "humane". His remarks caused a stir in the not-so-virtual world of social media and the actor issued an apology for his comments, saying it was never his intention to hurt people's sentiments.

"I've been made aware that one of my statements during an interview has caused a controversy and hurt people's sentiments. This was never my intention or meant that way. I would like to sincerely apologise to everybody and withdraw my statement," the actor had then said in a statement.