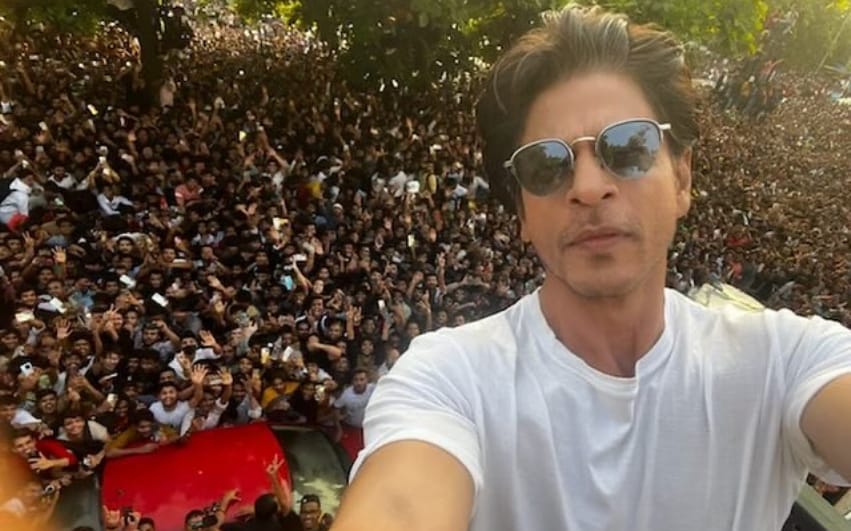 Mumbai (Maharashtra): Bollywood actor Shah Rukh Khan, on Wednesday, expressed gratitude to his fans for showering immense love on the actor and shared a birthday selfie with fans outside his house.

Taking to Instagram, Shah Rukh Khan shared a picture of him along with his fans standing outside his house Mannat and captioned it, "It's so lovely to live in front of the sea.....the sea of love that spreads all around me on my birthday....thank u. Grateful for making me feel so special....& happy."

Taking forward his ritual of greeting his fans outside his house, the 'Swades' actor didn't disappoint his fans and this year he greeted the fans twice outside Mannat. At 12 midnight and at 6 pm in the evening.

SRK's fan clubs shared a video on Instagram of him greeting all his fans.

Take a look at the video: https://www.instagram.com/p/CkdWikVrkzL/

The 'DDLJ' actor took selfies with his fans which he shared on his social media accounts.

Starstruck fans from various cities queued up since early morning to wish the star in their own special ways. Many even carried sweets, t-shirts, and huge posters of SRK along with them.

On the occasion of his Birthday, SRK treated his fans as he unveiled the official teaser of his next action thriller film 'Pathaan' which also stars Deepika Padukone and John Abraham in the lead roles.

Helmed by Siddharth Anand, the teaser is currently getting a lot of praise from the audience.

Apart from that, he also has Rajkumar Hirani's upcoming film 'Dunki' alongside Taapsee Pannu and south director Atlee's upcoming action thriller film 'Jawan' opposite south actor Nayanthara, which is all set to hit the theatres on June 2, 2023, in his kitty.

When RRR brings Oscar to India, please let me touch it: SRK after Ram Charan's shoutout to 'Pathaan'