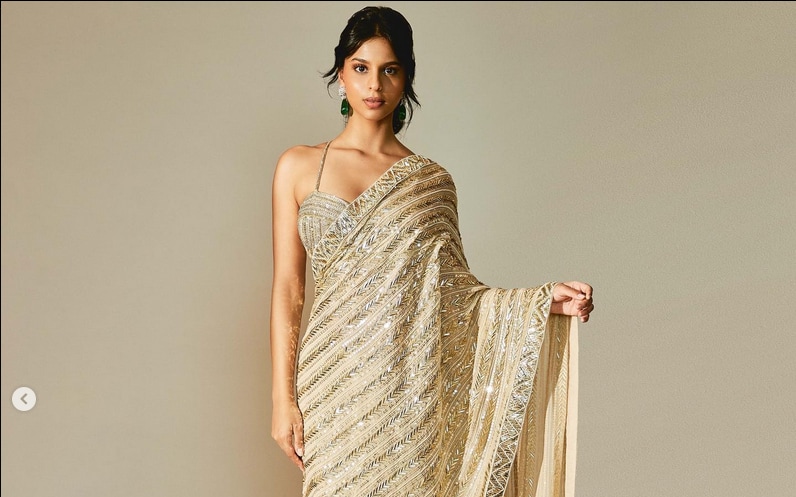 New Delhi [India], October 22 (ANI): Bollywood superstar Shah Rukh Khan on Saturday reacted to a picture of his daughter Suhana Khan by calling her "elegant and graceful", which the latter shared on her social media handle.

Taking to Instagram, Suhana shared a couple of pictures in which the soon-to-be actor was wearing a beautiful beige saree designed by celebrity fashion designer Manish Malhotra.

She paired the saree with a spaghetti-strap blouse and emerald earrings. For the caption, Suhana simply wrote, "@manishmalhotra05."

The social media post garnered over 3 lakh likes within a few hours of being shared. Responding to the picture shared by Suhana, her mother Gauri Khan wrote, "Sarees are so timeless."

Shah Rukh also commented on Suhana's post, writing "The speed at which they grow up, defies the laws of time....so elegant & graceful (did u tie the saree urself??!!)"

Replying to her dad, Suhana revealed it was Gauri who helped her with the saree. She wrote, "@iamsrk love youuu uhh no @gaurikhan did it for me."

Meanwhile, on the work front, Suhana is all set to make her acting debut with Zoya Akhtar's film 'The Archies'. Based on the backdrop of the 1960s, the film is the Indian adaptation of the iconic comics 'The Archies'.

Produced by Tiger Baby and Graphic India, it is a coming-of-age story that will introduce the teenagers of Riverdale to a new generation in India. The official release date of the 'The Archies' is still awaited. (ANI)