Security beefed up across Karnataka following the death of Puneeth Rajkumar 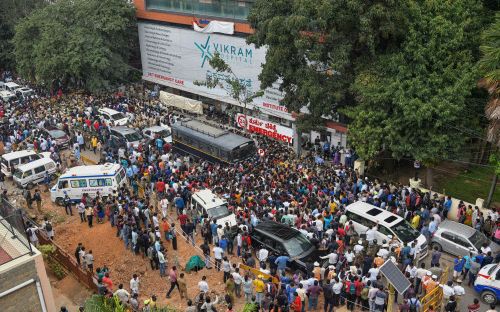 Public and fans of Kannada cinema actor Puneeth Rajkumar anxiously wait outside a private Hospital after the news of his critical health condition in Bangalore on October 29, 2021 | Photo: AFP

Bengaluru: Security has been beefed up across Karnataka following the death of popular Kannada actor Puneeth Rajkumar here on Friday.

According to family sources, Puneeth suffered a heart attack while working out at a gym. Immediately he was shifted to Vikram Hospital. Dr Ranganath Nayak stated that his condition was critical when he was brought to the hospital. But the efforts of doctors to revive him went in vain.

Puneeth's health worsened on Thursday evening but he did not visit a doctor. He went to the gym in the morning and developed chest pain. He was taken to a private clinic where ECG was done. During check up, his condition worsened and he was rushed to Vikram Hospital, where he succumbed to cardiac arrest.

Puneeth has donated his eyes. He is survived by wife Ashwini and daughters Vanditha and Dhruthi.

Security has been beefed up all across the state including state capital Bengaluru to manage the situation. The Kannada film industry has come to a grinding halt and all movie shows have been cancelled in the state.

Puneeth was born on March 17, 1975 and was fondly known as 'Appu'. He was also a singer, television presenter and producer. He acted in more than 29 films and has also appeared in many films as a child artiste. He won the National Film Award for Best Child Artiste for his role in 'Bettada Hoovu'. He made his debut in the Kannada film industry with the movie 'Appu' in 2002.