Rishi Kapoor's 'ashirwaad' made me who I am today: Shah Rukh Khan

Shah Rukh also mentioned how badly he will miss Rishi Kapoor's gesture of patting his head every time the two met. 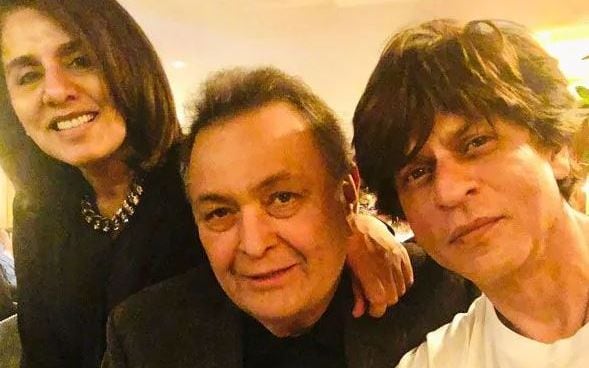 Superstar Shah Rukh Khan, who made his Bollywood debut alongside Rishi Kapoor in the 1992 film "Deewana", feels the late actors blessings helped him scale greater heights.

"As a young man entering the daunting world of films, I was insecure about the way I looked and afraid that I was not talented enough. The thought of failing meant nothing though, because even if I failed, I would have worked with the greatest actor I knew of - Rishi Sahib," SRK tweeted.

"On the first day of the shoot, he sat for my scene to finish after pack up, then with that famously radiant smile on his face he said "yaar tujhme energy bahut hai. That day in my head I became an actor! Few months ago I met him and thanked him for accepting me in that movie, he had no idea how he had encouraged me," he added.

Shah Rukh also mentioned how badly he will miss Rishi Kapoor's gesture of patting his head every time the two met.

"Few men have the capacity for grace as he did, fewer still have the large heartedness of feeling genuine happiness for the success of others. I will miss him for many things, but more than all of them, I will miss him for his gentle pat on my head every time we met. I will keep it in my heart always, as the 'Ashirwaad' that made me who I am today. Will miss you Sir, with love, gratitude and immense respect...forever," Shah Rukh wrote.

Along with the post, he also shared a still from "Deewana". Apart from "Deewana", SRK also shared screen space with Rishi Kapoor in a relatively unknown film of 1995 called "Jaadu", besides the 2012 release, "Jab Tak Hai Jaan".

Rishi Kapoor passed away at the age of 67 in Mumbai on Thursday. He was battling leukemia for the past two years.