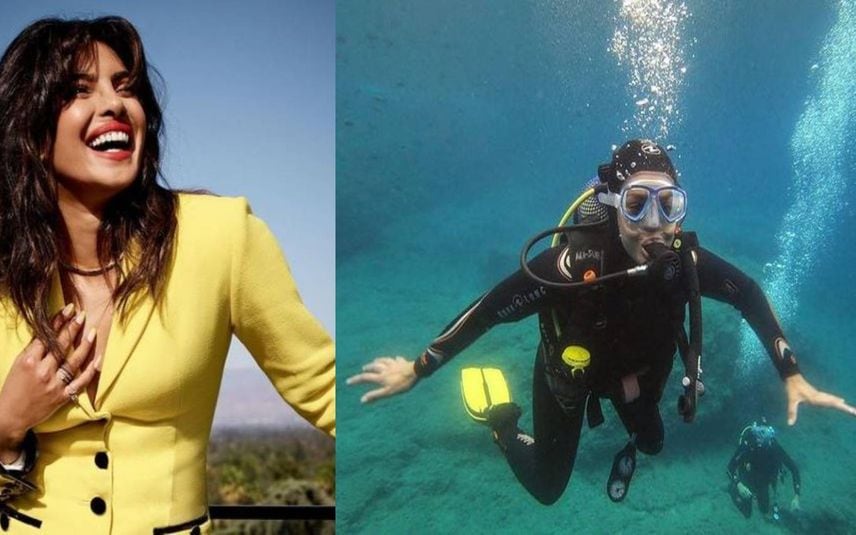 Mumbai: Priyanka Chopra Jonas has been busy with the filming of the American spy series 'Citadel' since the past few weeks.

It's a known fact that when Priyanka takes up a project, she puts her heart and soul into it, from sleeping on airplanes in order to make way for her watertight schedules to modifying her biological clock as per the time zones across the globe, the international star leaves no stone unturned to put up terrific performances that win the audience over and over again.

And those, who work hard, deserve a downtime once in a while where they could rejuvenate and strike back with a greater force.

Priyanka took some time off from her busy schedule to spend time in the cool blue waters of the Mediterranean sea. The actress went scuba diving accompanied by her brother-in-law Franklin Nathaniel Jonas, her mother Madhu Chopra and the camera crew of Citadel. She checked into her Instagram from the Spanish coast of Villajoyosa and shared several mesmerising pictures from her Sunday outing. She wrote, "There are days when the stress just needs to be silenced! What better way to do that than to explore the glorious underwater creations of God. I was very honoured that the camera crew from Citadel let me crash their party!"

Her pictures show a glimpse of the surreal underwater world wrapped in a turquoise blanket of the serene Mediterranean water. Priyanka also thanked her diving instructors as she wrote, "Big shoutout to the @alisubbuceo team. Penélope, Victor, Alejandro and everyone else, thank you for such a magical experience. I really needed it!! Thank you @tsigel for taking us out! So fun hanging with Sam, Paul, Josh, Tobias, Andy, Christina and Victor. Sunday well done! (sic)".

Reacting to the pictures, her cousin and actress Parineeti Chopra who herself is a certified scuba diver and had recently shared the snaps from her diving gig in Maldives commented, "Yayyy. So happy you're joining the wild side."

Talking of 'Citadel', the one-of-a-kind spy thriller will feature a mothership series starring Priyanka, Richard Madden and Roland Møller. Created by Patrick Moran and the Russo brothers, who are the leading forces behind the Avengers franchise, the series is set to premiere on the streaming giant Amazon Prime in January 2022.

The mothership series will be backed by several local language satellite series as spin offs from India, Italy, Spain and Mexico. The Indian counterpart of the series will be reportedly directed by Raj Nidimoru and Krishna DK of 'Go Goa Gone' fame and will star Varun Dhawan.