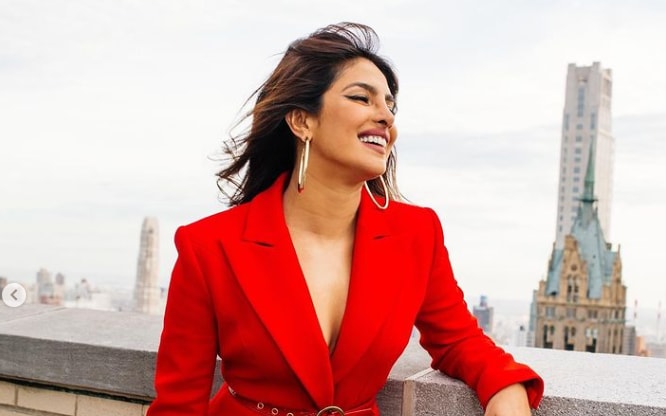 Mumbai: Global icon Priyanka Chopra Jonas, who recently welcomed her newborn daughter, has resumed work as she returns to the sets of Citadel.

Taking to her Instagram handle, the 39-year-old star shared a glimpse of herself on her IG story sporting a red coloured deep-neck cut-out dress and accessorizing it with some minimalistic gold jewellery.

'Desi Girl' Priyanka's side-parted beach waves and soft pink makeup complimented the entire look. She could be seen posing alongside her name card.

According to the official social media handle of the actor, she wrapped up the shoot of her upcoming series in December 2021, adding upto that she also shared her Russo Brother's project's work experience as "the most intense work".

'Citadel' is touted as an action-packed spy series. The 'Game of Thrones' star Richard Madden is also a part of it. The show will be out on Amazon Prime Video soon.

Apart from this, the 'Dostana' star has 'It's All Coming Back to Me' and a Bollywood film 'Jee Le Zaraa' with Alia Bhatt and Katrina Kaif, in her kitty.

She recently joined the production team for the upcoming family comedy 'Chicken and Biscuits' along with her husband Nick Jonas.